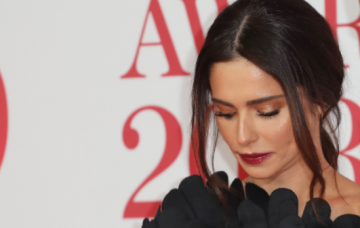 This should well and truly clear up all the rumours

Actions often speak louder than words, and Cheryl and Liam Payne put on a defiant display together at the BRIT Awards after speculation mounted about their relationship this week.

The couple held hands and gazed into each other’s eyes as they posed for pictures on the red carpet at the music awards ceremony at London’s O2 Arena, where Payne is due to perform.

In recent days, the pair have been at the centre of rumours that they are on the verge of splitting up.

On Tuesday, 34-year-old Cheryl had briefly responded to the speculation, declaring that “none of that matters” as she opened a Prince’s Trust centre in Newcastle.

On the red carpet, Cheryl sported a one-sleeved black mini dress with a ruffled detail across the chest and down the arm.

She held up a white rose in support of the anti-sexual harassment campaign Time’s Up that has made its way to the Brits after being a fixture at film award ceremonies the Baftas and the Golden Globes.

Earlier, Liam had showed a public display of support for Cheryl, praising his partner’s charitable efforts, as she launched Cheryl’s Trust Centre.

Read more: Coleen Nolan reveals MAJOR rule her kids have given her about dating

He wrote on Instagram: “How you find the time to do this I’ll never know. Over many years you’ve put all this together and put your heart into such a great cause!

Cheryl told the Press Association that inspiration for her involvement in the centre came about because of a “[bleep] year”.

The star developed and was treated for malaria in 2010, the same year that her once fairytale marriage to footballer Ashley Cole ended.

“About seven years ago I had a really [bleep] year,” she said.

“I wouldn’t call it a lightbulb moment but I had a moment of ‘I need to help others that are feeling this’.”

Having a tough time “reminds you of how I actually felt when I was younger growing up here – those same feelings, feeling vulnerable, insecure, my self-esteem was low.

“I just had a passionate feeling of wanting to help,” she said.

The former Girls Aloud star and X Factor judge said she still relates to young people in the North East, despite her fame and success.

“You never forget,” she told the Press Association. “I have never forgotten how I felt as a teenager.

“It’s tough growing up in the North East, especially now the unemployment rate is ridiculous.

“So, if we can help one, two, three, four people a year, let alone thousands or hundreds, get a job or get on their feet with their own business, then I have done more than my fair share.”

The teenage Cheryl would have thought the centre was “awesome”, she said, adding: “I would have probably either been here every other day … or worked here.”

Cheryl added: “This is the biggest achievement … of my entire career because it means so much.

On working with the Prince’s Trust, she told BBC Breakfast: “The partnership just felt natural and real. We are the perfect marriage.”

Read more: Cheryl reveals what inspired the launch of her youth centre in Newcastle

And she said of her teenage years: “If I hadn’t been fortunate enough to get out I don’t know where my life would be right now.

“I want to say anybody, if you’re feeling … vulnerable, sad, lost, the door’s here. You’re more than welcome. We’ll welcome you with open arms … that’s what we’re here for.”

What do you think of Cheryl’s latest project? Leave us a comment on our Facebook page @EntertainmentDailyFix and let us know.