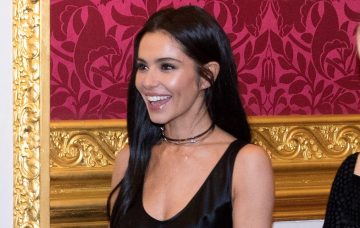 Either way, that's a nice ring

When you rarely make public appearances – and those appearances are always heavily scrutinised – you better believe your outfit is carefully thought out.

Which is why fans got so excited last night when Cheryl turned up at the Prince’s Trust ‘Invest in Futures’ event, wearing a diamond ring on her wedding finger.

Speculation raged that Cheryl, 34, might  be engaged to her boyfriend, Liam Payne, 24, almost a year after their first child, Bear, was born.

Twitter users commented: “Ahaha! They should get engaged”, and: “Sure… it’s just ‘costume jewellery’…”

The Girls Aloud singer made no attempt to hide the platinum ring on her left hand.

She mingled with famous faces such as Prince Charles and actress, Dame Helen Mirren at the reception.

It’s expected the Prince’s Trust Cheryl’s Trust Centre will help more than 5,000 youths over the next three years.

Tonight The Prince of Wales attended a @PrincesTrust ‘Invest in Futures’ reception with charity Ambassadors and young people who have been supported by the Trust. pic.twitter.com/j8tSmaS1xp

Sadly for any wedding lovers out there, The Sun Online reports that their sources claim the ring is “just costume jewellery”.

But it’s not the first time the pair have hinted that marriage is on the cards for them.

Liam has referred to his girlfriend as his “missus” and “wife” on occasion, and then had to confirm they haven’t wed in secret.

In fact, the former One Direction-er has admitted that he’d rather have more children before they walk down the aisle, telling The Sun: “I would probably say, if you pushed me, a baby [before a wedding].”

He continued: “The options are definitely open for me on having another baby.

“Bear is the best creation I’ve ever made so I welcome the idea completely. But, when, I don’t really know.”

Meanwhile, Liam spoke on Thursday evening about family life to Hit 107 in Australia.

He told host, Angus O’Loughlin, the first thing he does in the morning.

Liam said: “It could be getting poked in the eye by my son and then get woken up with him jumping on my face. He woke me up the other day by slapping my cheeks! He’s such a happy soul in the morning.”

He also revealed how he and Cheryl, who he met ten years ago on the set of X Factor, named their son, saying: “We wanted to meet him first, and [Cheryl] just had this feeling she wanted to call him Bear! He’s actually not that hairy but he’s just MASSIVE.”

Would you like to see these two walk down the aisle? Leave us a comment on our Facebook page @EntertainmentDailyFix and let us know what you think!