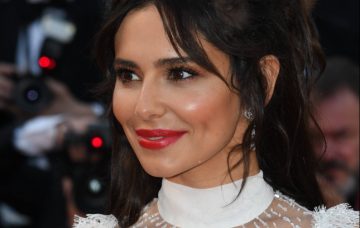 Cheryl divides fans with first Instagram pic in a month

She has been enjoying the Cannes Film Festival

Cheryl returned to Instagram for the first time in over a month to share a photo from her visit to the Cannes Film Festival.

The former X Factor judge, 34, flashed a smile as she lounged against the railings of a balcony overlooking a beautiful background scene of beach and blue waters.

And her rather eye-catching outfit had fans talking!

After wowing on the red carpet last night in a white frock with translucent panels, the mum of one opted for an edgier look for day two in Cannes.

She wore a mismatched pinstripe crop top and skirt with thigh high split, teamed with shiny over the knee boots.

And it’s fair to say fans were divided on the look!

Plenty of fans praised Chezza’s unique style, and said she looked stunning as per usual.

Others, however, weren’t convinced this was Cheryl’s best look…

Cheryl attended a screening of movie Ash Is Purest White on Friday night alongside models Bella Hadid and Eva Herzigova.

She walked the red carpet without One Direction singer boyfriend Liam Payne, 24, who has been busy promoting his solo music over the last few months.

Cheryl’s in Cannes as part of her role as an ambassador for L’Oreal.

It’s the first time fans have seen Cheryl on the red carpet since February, when she joined Liam at the BRIT Awards in London.

She’s been taking a break from the limelight over the last year to focus on son Bear, one, but is gradually returning to the spotlight.

As well as filming the pilot for BBC’s upcoming talent show The Greatest Dancer, she’s been working in the studio on new music.

He told The Sun: “I would like to collaborate with Cheryl again eventually, she’s amazing.”

The Voice UK coach worked with Cheryl on her debut album 3 Words back in 2009, and she supported his band Black Eyed Peas on tour.

Have you missed Cheryl while she’s been away? Leave us a comment on our Facebook page @EntertainmentDailyFix and let us know what you think!