Cheryl and Liam reportedly ‘struggling to spend time together’

Pair haven't been pictured together for months.

They have both been throwing themselves back into work after becoming parents for the first time last year, and now a friend of Liam Payne and Cheryl has said their hectic schedules is putting a “strain” on their relationship.

The source told the MailOnline that the couple are struggling to spend any quality time together.

The friend of Cheryl said: “The fact of the matter is, like most young couple’s with busy work lives and the demands of an infant they have been struggling to spend time together.

“There are the very real strains of trying to adapt to parenthood whilst being in the spotlight and having to appear as though everything is rosy all of the time.

“It is not real life and is not the life Cheryl and Liam are currently living as a couple.”

Liam, 24, has recently been busy travelling the world promoting his new single with Rita Ora, which features in the new Fifty Shades film. He’s also been working on new music in L.A.

Cheryl meanwhile is also rumoured to be working on new music after giving birth to their son Bear last March.

She’s also filmed a pilot for a new BBC talent show called Greatest Dancer, which could be commissioned as a new series later this year with her as a judge, and she’s tipped to be returning to The X Factor panel this summer.

It’s been months since the couple were seen on a night out together as Cheryl’s friend said the 34-year-old now prefers to stay in and care for Bear.

They told the MailOnline: “Cheryl basically went into hibernation when she got pregnant and has made the decision to be a stay at home mother with no nanny and is looking after Bear herself. She doesn’t like going out much as she used to.”

Cheryl did have a night out this week though as part of a campaign with the Prince’s Trust and L’Oreal, where she met Prince Charles at St Jame’s Palace.

And in a  recent interview on New York radio station 103.5 KTU Liam said he intended to take Cheryl out on Valentine’s Day.

“I think we will go out for dinner somewhere, have some time in London,” he said.

If they did go out, they managed to evade the paps and also didn’t share any images of a date on their respective Instagram accounts.

Liam instead shared a photo of Bear in a cute baby grow with the caption: “Happy Valentine’s Day @cherylofficial and everyone. Looks like I’ve got the big guy to compete with now.”

It was actually August that Liam last posted a picture of himself with Cheryl, while she hasn’t posted one of them together since last July.

It’s prompted their fans to ask why they haven’t been sharing any selfies recently.

One said on Twitter: “Hey @LiamPayne the last you posted a selfie on Instagram with Cheryl was August last year. Could you bless us with a new one please Liam.”

Another agreed, tweeting with an old pic: “Still my favourite photo of Liam and Cheryl. When will you bless us with a selfie like this again or a family photo.”

A third wrote: “@Liampayne as your home would you be able to give us a selfie with Cheryl please. We miss seeing your selfies together.” 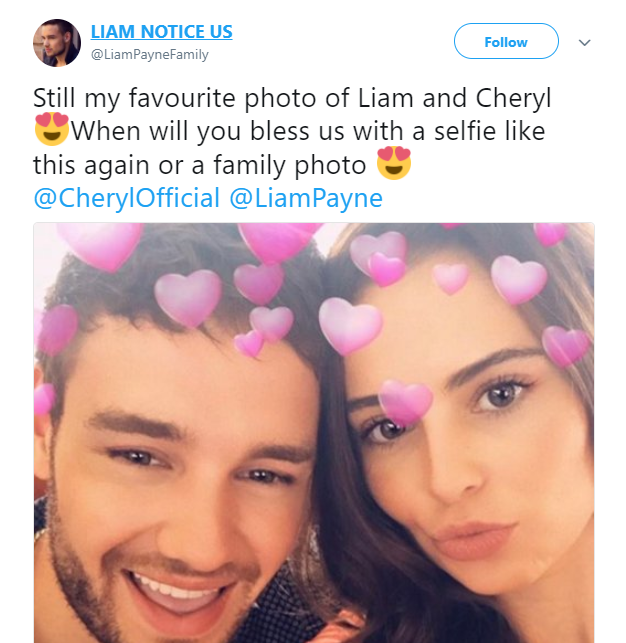 Instead, Liam has mostly posted selfies of just himself of late, and he complained in his New York radio interview that Cheryl doesn’t compliment him enough on them.

He said: “I would like her to say, ‘you look nice in that’, a little compliment now and again to make me feel good.”

The source said while the couple aren’t having an easy time at the moment, Cheryl is keen for them to expand their family.

The source said: “Cheryl just wants what every woman wants. A loving, happy family and someone to grow old with.

“There is no doubt she wants more children – but it is fair to say at the moment there is a lot of pressure on both her and Liam. Being apart isn’t helping that.”

ED! have contacted Cheryl and Liam’s representatives for a comment.

Would you like to see more of Cheryl and Liam together? Leave us a comment on our Facebook page @EntertainmentDailyFix and let us know what you think!