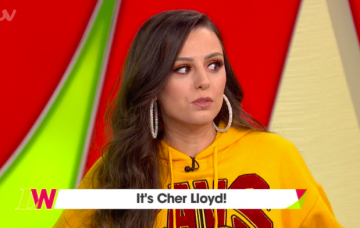 The singer is so sweet!

An emotional Cher Lloyd has opened up about her baby daughter Delilah-Rae, describing the day she gave birth as “the most amazing moment of my life”.

The former X Factor contestant appeared on Thursday’s episode of Loose Women alongside presenters Andrea McLean, Linda Robson, Chizzy Akudolu and Nadia Sawalha, to talk about life with her five-month-old.

“Oh I love motherhood so much!” Cher said as she sat down with the panel, adding: “It’s a bit weird for me today because normally I’m at home watching the show! And I’ve got Delilah and we’re watching the show together. It’s strange!”

The 25-year-old, who was only 17 when she appeared on Simon Cowell’s talent show, described what a “brilliant” baby Delilah is, explaining: “From the age of six weeks, she’s slept the whole night through… I am so lucky, really really lucky. She’s lovely.”

She said: “Before, I was obviously petrified, but luckily I had the most amazing midwife. She was absolutely fantastic. And it was the best I could’ve wished for, just me and my husband. It was just the most amazing moment of my life, meeting my…”

The singer trailed off as she got emotional, covering her eyes and saying: “I feel like I’m going to cry!” as the presenters comforted her.

After a moment, looking teary-eyed, she continued: “I just feel like… when you see the baby, it’s like, ‘Oh my God, I’m going to love you forever!'”

The Swagger Jagger singer also opened up about her relationship with Craig, calling it a “fairytale” after marrying aged only 20.

Cher has previously said of him: “We come from such different backgrounds. He’s so lovely. I’m so lucky. We definitely are a solid team and I think we just deal with anything that’s thrown at us.

“We’re so excited to be starting the most incredible – I hate to say journey, as I hate that word – but we are. It’s like a new start.”

The pair welcomed their first child on 25 May.

Cher announced her baby’s birth via social media and shared some adorable images on Instagram.

In the first snapshot, she wrote in the caption: “Our baby girl is here! We are so in love.”

Another photo showed Delilah-Rae clad in pink dungarees, with a white bunny rabbit to her left. The pic has been cropped so only half of the little girl’s face is visible.

Cher announced her pregnancy in January, dropping a double whammy on fans: a baby was on the way and a new album!

The star found fame on the seventh series of X Factor back in 2010, where she was mentored by Cheryl. It was the same series that launched the careers of One Direction, Rebecca Ferguson and Matt Cardle.

Cher’s new single is out this week and we can’t wait to hear some new music. It’s a good job that baby has been letting her sleep through the night…

Are you excited to hear Cher’s new music? Leave us a comment on our Facebook page @EntertainmentDailyFix and let us know what you think.