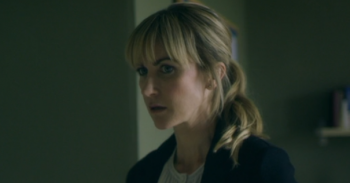 Cheat continued last night and new twists in the show’s dark plot had viewers speculating over the significance of the title.

ITV’s latest thriller has university lecturer Leah, played by Coronation Street actress Katherine Kelly, fighting to stop her seemingly perfect life from unravelling and paranoid that one of her students is gunning for her downfall.

As the second instalment drew to a close, Rose exposed Adam’s unfaithfulness by texting a sexually explicit photo of him to Leah.

On Twitter, viewers pointed out how the turns in tonight’s episode changed the way we might see the title, with many wondering who is the real ‘cheat’.

One wrote: “Amazing still not sure who is the #Cheat.”

Someone else commented: “I don’t know who is the bigger cheat, Adam or Rose.”

Another fan cottoned on to all this before the second episode had even aired, tweeting: “I think its Adam who is the cheat maybe with her or her mum.”

Others took the opportunity to blast Adam, who we know from a flash-forward in the first episode ends up dead.

One savage tweet read, “Adam deserves death I don’t even care who kills him” and another asked, “How can Adam be so rational at first and yet now so pathetically idiotic”.

In a conversation with Radio Times, Tom – who reportedly had a real-life affair while married to his ex-wife, Kerry Bradley – revealed that he found acting in the role of an adulterer “cathartic”.

Commenting on the experience of portraying Adam, he said: “Part of your job is to help people understand what emotions people go through in any given situation so, inevitably, someone who can access it and understand it is going to, perhaps, do that more successfully than someone who can’t.”

When asked if he thought there was something “redemptive” about playing an adulterer, he replied: “I don’t think it’s redemptive, no! That implies some kind of martyrdom. But it is cathartic… And it’s therapeutic.”

Whatever Tom’s thoughts on the character, viewers were far more shocked over the death of Leah’s pet cat, Betsy, than they were upon learning that Adam’s headed for the morgue.

Are you enjoying Cheat so far? Leave us a comment on our Facebook page @EntertainmentDailyFix and let us know what you think of this story.