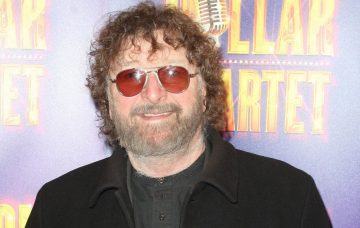 Musical legend Chas Hodges, of duo Chas and Dave, has passed away after a battle with cancer, it was announced on the pair’s official Twitter account today.

The statement read: “It is with great sadness that we announce the passing of our very own Chas Hodges.

“Despite receiving successful treatment for oesophageal cancer recently, Chas suffered organ failure and passed away peacefully in his sleep in the early hours of this morning.”

It is with tremendous sadness that we announce the passing of our very own Chas Hodges. Despite receiving successful treatment for oesophageal cancer recently, Chas suffered organ failure and passed away peacefully in his sleep in the early hours of this morning. pic.twitter.com/bwxqfHUjUg

The 74-year-old had been diagnosed with oessophageal cancer in February last year but a Facebook post at the time revealed  the illness had been caught ‘at an early stage.’

The post added “He’ll be undergoing treatment immediately”, and that he “expects to be out on the road with Dave” in the near future.

In May, the pianist said he was ‘feeling great’ after chemotherapy and radiotherapy.

He added to The Sun at the time: “The doctors are still keeping their eyes on me, but I am feeling great. I had chemotherapy and radiotherapy and it seems to be doing the trick. My hair has grown back thicker.”

Yet in August, Chas revealed in a statement on the duo’s website that they had been forced to cancel any upcoming gigs due to his ‘extreme illness’.

Their last gig was played at London’s Hyde Park at the start of July.

Chas wrote: “In my life as a musician/entertainer, I would say the most depressing thing to have to do is to cancel a gig/gigs.

“Fortunately throughout my career of thousands of gigs with Dave or in other bands, these times have been few and far between and only extreme illness in the past (and I mean extreme) has prompted me/us to have to make this decision.

“So it is because of extreme illness on my part that the forthcoming gigs are going to have to be cancelled.”

He added that although recent check-ups had found no sign of cancer, his treatments had left him feeling “well below par”.

Fans of the star have left hundreds of messages sharing their devastation, and sending well wishes to the Chas’ friends and family.

Leave your messages of condolence on our Facebook page @EntertainmentDailyFix!