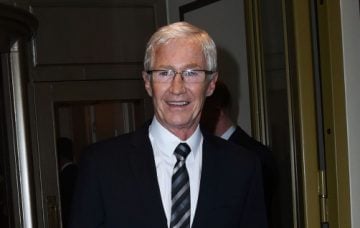 The Press actress has admitted she was “so jealous” of the Venom actor when he got to meet Paul at Battersea Dogs home in London, because she is in love with the 63-year-old Liverpudlian.

She even joked it caused a “rift” between her and Tom!

Speaking about the comedian, she told You magazine: “I was very cross when Tom got to meet Paul O’Grady at Battersea Dogs Home and I didn’t.

“That caused a rift for a little while. I’ve read all his biographies and I’m slightly obsessed by him. I need to meet him.”

Tom made a guest appearance on an episode of Paul’s ITV show, For The Love of Dogs, and they’ve stayed in touch ever since.

“I have his number and, yes, we text each other.”

Meanwhile, Charlotte, 36, also revealed she had no idea Tom had an Instagram account until recently because she doesn’t have social media herself.

The Dunkirk actor has 3.7 million followers on the app and often shares pictures of himself with cute rescue dogs.

Asked if she thinks it’s bizarre that his fans are obsessed with seeing the 41-year-old hunk posing with animals, she said: “He’s always been a bit of a Doctor Dolittle. There are numerous friends and family who now have dogs, that didn’t know they wanted one until Tom happened to find a dog that didn’t have a home.

“Even when we get a dog that’s intended to be mine, it always loves him more than me.”

Tom and Charlotte, 36, first met on the set of a Wuthering Heights adaptation in 2009 and have also starred in Peaky Blinders together.

They tied the knot four years ago – making that Tom’s second marriage as he was previously wed to producer Sarah Ward from 1999 until 2004.

The couple are parents to a three-year-old son and have a second child on the way.

Tom has previously spoken about how he and Charlotte try never to go longer than three weeks without seeing each other.

He said: “I like to go no longer than three weeks without seeing Charlotte but it can be tricky because we both go to opposite sides of the globe, then we have to meet in the middle. We’re managing so far.”

And he has gushed about how “kind and pure” his wife is, saying: “Aw, she’s pure. She’s just a very kind, pure person.”

Are you obsessed with Paul O’Grady, too? Would you like to meet him?! Leave us a comment on our Facebook page @EntertainmentDailyFix and let us know what you think!