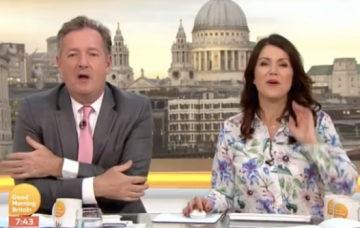 He told her to "put some clothes on"

Piers Morgan took the opportunity to wind up Charlotte Hawkins on Wednesday’s Good Morning Britain by mocking her choice of outfit.

Charlotte opted for a floral summery dress, which was perfectly suited to the warm weather outside.

But after she complained she was feeling a bit chilly in the air conditioned studio, Piers scolded his co-presenter and told her to “put some clothes on.”

“I’m freezing,” Charlotte replied, as she stood up to showcase her outfit.

Piers asked: “I had a mad idea, Charlotte, have you thought of wearing any clothes to work?”

Charlotte hit back: “I’m wearing a summer dress. It is actually sunny outside!”

But Piers wasn’t having any of it and continued his rant: “Maybe if you put some clothes on, you won’t feel quite so cold.”

“I’m wearing several layers,” he added, pointing to his suit and shirt, and then to co-host Susanna Reid, saying: “Susanna [is] perfectly attired for a nice brisk studio.”

Susanna then piped up to support her friend, saying: “But Charlotte’s dressed for the weather outside.”

She told Piers: “And for some reason it’s almost arctic in this studio because you are wearing so many clothes, we have to have the air conditioning on for you so you don’t overheat!

“You get too hot in your layers of suit and shirt and vest.”

Defending himself, Piers said: “I don’t make any requests about temperature. I don’t care if it’s hot or cold. I’m actually the least diva person you’ll meet apart from I like certain things.”

Charlotte then quipped: “I’ll be wearing a jumper tomorrow in that case.”

This isn’t the first time Piers has decided to poke fun at one of his co-hosts’ attire.

Last week, Piers mocked Susanna’s blue and white striped shirt by saying it looked like she was wearing pyjamas.

He kicked off the show by discussing the shirt, saying: “It’s really early. Some people may still be at home or maybe still in bed… wearing their pyjamas!”

Susanna insisted: “This is actually a dress, this is not pyjamas. I can prove it by standing up!

And if that wasn’t bad enough, Susanna revealed she found out somebody thought she was wearing a maternity dress!

“I’m not the father, I want that to be crystal clear!” Piers quipped.

What did you think of Charlotte’s outfit? Leave us a comment on our Facebook page @EntertainmentDailyFix and let us know what you think!