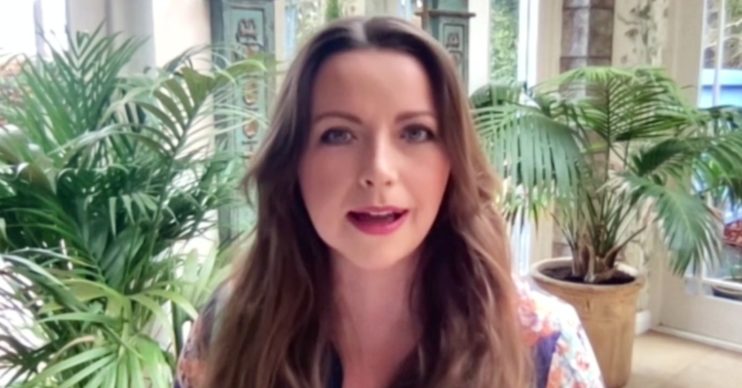 Charlotte Church baby: Singer confirms she has given birth after Holly Willoughby blunder

It's her first baby with husband Jonathan Powell

Charlotte Church has confirmed she has welcomed a baby with husband Jonathan Powell – just hours after Holly Willoughby let the news slip.

Showing off her tiny daughter for the first time, she said: “I would love to introduce you to my little baby. COVID realness honey.”

The appearance marks the first time Charlotte has introduced her new addition to the world.

During the podcast, the star showed her adorable daughter dressed in a pink romper suit.

I would love to introduce you to my little baby

Charlotte first announced she was pregnant in a low-key tweet in March.

At the time, the mum-of-three casually confirmed she was “preggers” as she spoke to a friend about missing a concert.

Meanwhile, on Wednesday, This Morning’s Holly let the news slip despite no prior announcement from the singer.

Appearing on the ITV show, Charlotte chatted to Holly and her co-host Phillip Schofield from Wales.

During the chat, Holly said: “You’ve got three kids now! How is home schooling?”

In addition, Charlotte replied: “I’ve been homeschooling my own children now for a few years now.”

Charlotte is already a mum to Ruby, 12, and Dexter, 11, with her ex Gavin Henson.

Furthermore, the singer previously suffered a miscarriage just before her wedding day to husband Jonathan.

At the time, a statement read: “Charlotte and Jonny are very sad to announce that they lost their baby. Now is a time for grieving and being together as a family.

“We kindly ask everyone to respect that peace.”

The 56-year-old was admitted to the University Hospital of Wales, Cardiff before Christmas after contracting the disease.

Sadly, Charlotte didn’t share a relationship with her father.

Charlotte’s dad walked out on his wife Maria and their daughter when she was just two years old.