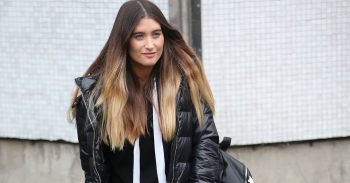 Back pain, nausea and water retention - not fun!

And, while they are excited about growing their family, the Debbie Dingle actress has admitted she’s not too hot on the actual pregnancy bit!

The 31-year-old told OK! magazine: “I’ve been suffering from back pain during this pregnancy.

“I saw a physio who said I should try Pilates and it’s really helped.

“I have more aches and pains this time. My face looks different because of the water retention, too.

“I hate it but I remind myself that I’m lucky enough to be pregnant so I have to embrace it.”

She also revealed: “I feel more tired than I did during my previous pregnancies.

“I just feel so sick and shattered all the time. This pregnancy does feel like my worst one, but I’m sure I think that every time!”

Earlier this month, hubby Matthew, 38, revealed she was suffering badly with morning sickness.

During an interview with new! magazine, he said that Charley has been craving a lot of “salt and vinegar crisps”.

The couple already have two young sons, Buster, eight, and three-year-old Bowie, with her Emmerdale co-star Matthew, so she has a lot to contend with!

But fortunately her work schedule has been less hectic, which has helped.

“I have been quite quiet at work, which has been perfect timing,” she explained. “I started throwing up at week six and I only just stopped. I’ve just got used to the constant nausea and nothing really helps it.”

The actress also spoke on the gender of their little one and how they plan to have another child in the future.

Charley said she doesn’t mind if they have a boy or girl this time, but she predicted she will end up having three boys and a girl.

Do you think Charley and Matthew will have a boy or a girl? Leave us a comment on our Facebook page @EntertainmentDailyFix and let us know what you think!