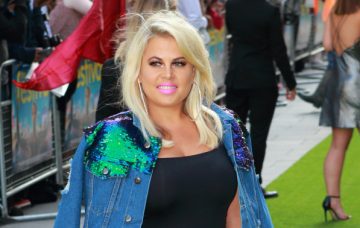 She's been suspended for "improper use of social media"

The reality star served as a matchmaker on the E4 dating show which aims to pair single celebrities up with members of the public.

A rep for the programme confirmed: “Nadia has been suspended following improper use of social media.”

Nadia has not yet commented on the reports.

News of Lady Nadia’s suspension was broken by The Sun, which claimed she’d set up fake Twitter profiles to troll other users.

Now, her former co-star Eden has come forward to say he believes Lady Nadia may have used two fake profiles to troll him in the past.

The two Twitter profiles in question were reportedly used to hurl insults at Eden while also lavishing praise on Nadia.

Eden told the newspaper he wants a public apology from Nadia if she’s behind the accounts.

Eden served as matchmaker alongside Lady Nadia until March, when he quit the show amid allegations of a feud with his co-star.

Nadia, however, has vehemently denied a falling out, tweeting earlier his year: “In response to further reports today that Eden left Celebs Go Dating because of a fall out with me, I want to set the record straight that his decision to leave the show was for his own reasons and was absolutely nothing to do with me.”

Eden himself has said he chose to leave the show to focus on his other work projects including relaunching his own dating app and his music PR agency.

Eden has been replaced as a matchmaker by Paul Carrick Brunson, who runs matchmaking firm PCB Agency.

Celebs Go Dating is currently working on a fifth series, which is due to air later this year.

Are you a fan of Celebs Go Dating? Leave us a comment on our Facebook page @EntertainmentDailyFix and let us know what you think!