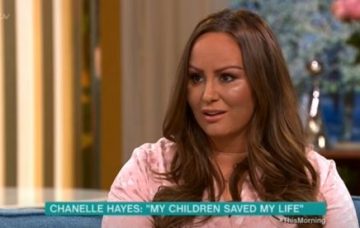 Chanelle Hayes has opened up about her split from Ryan Oates just ten weeks after she gave birth to their child.

The former Big Brother star welcomed son Frankie Oates in August 2017, but less than three months later it emerged she and teacher Ryan had parted ways.

Appearing on ITV’s This Morning on Thursday, she said: “Things just kind of went a bit wrong really. He still sees him obviously a lot and he plays a really active role [with baby Frankie]. We are on good terms now and we will end up no doubt being good friends in the future.”

When asked why the couple split, Chanelle replied: “Honestly, I genuinely… you’d have to ask Ryan.”

Read more: Holly Willoughby warned to be careful by This Morning guest

Recalling the weeks after Frankie’s birth ahead of the split, she said: “It was horrendous. I was just so, so tired and hormonal, and I was still anaemic on top of that. I just think maybe it was just a bit much. I’m not sure.”

Chanelle – who is also mum to son Blakely, seven – played down the idea having a baby affected their relationship, but said: “I think it was just how tired everybody was, how much of a change it all was. I think maybe we were both a little bit naïve in what was to come, really.”

The star spoke about gaining weight before and during her pregnancy with Frankie, saying it led to a loss of confidence and anxiety attacks.

“I have always had anxiety for a number of years but it got so much worse. It got really bad. My mum and dad were so worried about me,” she said.

“It wasn’t really nice at all. But I have come out of the other end of it and decided to throw myself into healthy eating and following a good plan I’ve found. Seeing the weight loss results has given me confidence back and you feel better about herself.

“I think when you’re so low and going through such a horrendous time, thank God for both my boys. I would never ever be without them. If they were not there, I genuinely would not have seen the point of being here.”

Chanelle admitted she’d neglected herself while pregnant and after giving birth, choosing to focus all her energy on Ryan and the boys.

“[Ryan] obviously did a lot for me and he did a lot for Blakely especially, and he’s always been a really good role model for my eldest son.

“I was always cleaning the house, cooking food, doing normal things. I’d cook his food to take to work, then I’d neglect myself and just grab something quick on the run and the weight went on.

“I moved to be with him, moved Blakely out of school and 60 miles away to be with him. That was my choice, he didn’t force me. There was no ultimatum. I think I was so in love with this idea of the happy ending I did whatever it took to get that.”

Chanelle said she’s pleased with her weight loss progress in recent months, but feels she has a way to go before she reaches her target.

“I was huge when I had Frankie, absolutely massive and really unhealthy, but now I’m going to the gym and it really helps me.

“I think losing the weight has not only been better for me, but it’s been a really nice bonding experience for me and Blakely. We do a park run at the weekends and we’ve been cooking together, following the recipes. He’s now so into cookery shows and loves cooking. And Frankie can eat it too as I’m doing baby led weaning, so we can all eat together which is really nice.”

“There is always a goal you want to set yourself and always things that could be improved,” she added. “I still want to lose more weight, I’m not at my target yet, but everything is positive.”