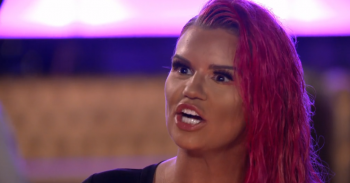 Kerry Katona left Celebs Go Dating fans in hysterics as she asked a singleton “how big” his manhood was before walking away.

On Monday night’s show, the mum-of-five was tasked with finding her co-star Chelsee Healey a date and she wasted no time getting to know the single lads.

Kerry, 38, went up to Lewis and began quizzing him on where he would take Hollyoaks actress Chelsee on a date.

She said: “Where would you take her on a date?” to which Lewis replied: “A nice meal… and I would do something funny.”

Kerry asked: “Like what?” to which Lewis said: “Bowling.”

Kerry hit back: “That doesn’t make me laugh,” before Lewis insisted: “It would make you laugh if I was there.”

Moving on to get to know Lewis a little bit better, Kerry asked: “How big’s your [expletive]?”

Clearly shocked by her question, Lewis’s jaw-dropped as he burst into laughter.

Kerry seemed to be unimpressed with his answer as she shouted “thanks” before walking away without looking back.

Lewis was left shocked as he watched Kerry walk away.

Viewers watching from home were left in fits of laughter over Kerry’s bold question.

One person wrote on Twitter: “That was savage from kerry #CelebsGoDating,” while another said: “As if Kerry said how big’s your [expletive] omg.”

A third tweeted: “Kerry Katona how big’s ya [expletive], wow.”

Another said: “Kerry’s sex chat is beyond cringe, stop at #celebsgodating.”

Kerry’s sex chat is beyond cringe, stop at #celebsgodating

This isn’t the first time Kerry has entertained viewers with her antics on the show.

During an episode last month, Kerry lashed out at her date who insinuated her having a baby aged 20 was a ‘mistake’.

Welsh Subway franchisee Nick also took the mick out of the former Atomic Kitten star for spending thousands on her three weddings.

But it was when Kerry expressed a wish to be a grandma in the next decade or so that Nick’s attitude really grated with her – and her fans.

“You learn from your mistakes though, don’t you?” he commented.

“I wouldn’t say it was a mistake,” the mum-of-five replied defiantly.

Nick also put his foot in it by bizarrely claiming woman ‘overreact’ to the pain of childbirth.

Putting him in his place with the perfect comeback “Go and [bleep] a pineapple out and tell me how much it hurts. That’s exactly what it is like. What a [bleep]!”

Reflecting on their disastrous date, Kerry fumed to the camera: “Having five kids and raising them all by yourself is not a mistake, who does this guy think he is?”