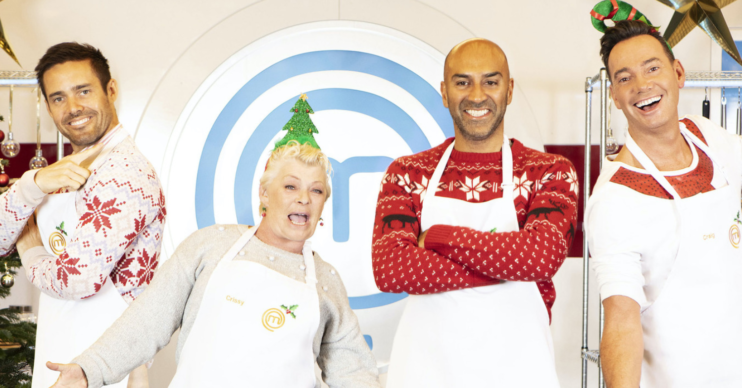 The presenter's back in the famous kitchen again

Who is on Celebrity MasterChef Christmas Cook-Off tonight?

But when were they on before and what were their most memorable moments?

The 55-year-old Strictly judge has been a fixture on our televisions since 2004.

Craig, who revealed he had been bisexual, was married to Jane Horwood in 1990, but the marriage ended two years later.

Where did he finish?
Craig appeared in the second series of Celebrity MasterChef, where he made it all the way to the final.

He battled it out with Midge Ure and eventual winner Nadia Sawalha.

What was his most memorable moment?
In the semi-final, Craig was late presenting his food for the food critics.

Unfortunately, one of those food critics went on to call his oysters Rockefeller “various types of snot”.

Reality star Spencer Matthews made his name in Made In Chelsea.

Spencer is married to Irish model, Vogue Williams, and together they have a son and a daughter.

Where did he finish?
Spencer battled it out in the final with rugby star Martin Bayfield and ex-EastEnders star John Partridge.

John went on to win.

What was his most memorable moment?
In a blind panic during a stint in a pro kitchen, Spencer stole some boiling water from fellow finalist Martin.

“Did you steal my water? Martin glared.

Despite a varied acting career, Crissy, 62, is best known for her appearances in ITV comedy, Benidorm.

She also took part in the 2011 series of I’m A Celebrity.

Where did she finish?
Sadly, Crissy didn’t make it through the heats.

However, her fun personality and, ahem, unusual dishes made her a memorable contestant.

What was her most memorable moment?
Crissy shocked John when she cooked fish, sweet potatoes, onions and rice… as well as pears.

A stunned John asked: “And how often do you have pear in your rice?”

He went on to call it a culinary first.

Forty-six-year-old Amar is an entrepreneur and TV presenter.

He’s presented the BBC Two show Travelling Blind, and reportedly turned down the chance to appear on Celebrity MasterChef once before.

Where did he finish?
Amar made fans teary when he made it through to the semi-final.

He said: “As a blind person it feels like I am breaking new ground.

“Two weeks ago I wasn’t able to cook any of this at all. Now I’m able to experiment and create my own touches.”

Has Amir Latif always been blind?

No, Amir Latif was not always blind. When he was four, doctors told his parents that he would become permanently blind. By the time he was 18 he had lost 95% of his eyesight.

What was his most memorable moment?
His first ever dish was spaghetti with a roasted chicken leg, tomato and basil sauce and cheese.

John called it really “tasty” and it proved to Amar that he really could cook.

Cue tears all round, for Amar Latif has achieved much more as a blind man than so many contestants!

Celebrity MasterChef Christmas Cook-Off is on tonight (Wednesday December 23) at 9pm on BBC One.