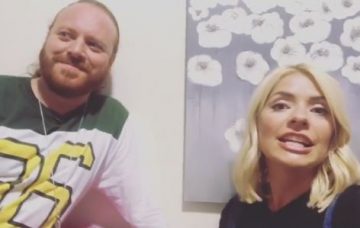 She had a fun way to pass the time, though!

Holly Willoughby had fans in stitches after revealing her unique way to keep amused while filming on the latest episode of Celebrity Juice was halted.

The 37-year-old shared a video to Instagram alongside Celebrity Juice host Keith Lemon explaining why they’d been forced to stop production mid-way though the episode.

Holly said: “This just happened. We were filming the show and then suddenly it went black. I thought everyone was just getting a bit hot in the studio, so they turned the studio lights off.

“But not the case at all, because…”

Holly pointed at Keith, who continued the story by saying: “The studio lights have broken and the air con is broken, the power is out in the studio of Celebrity Juice.

“We got all the chat done at the beginning that we normally do, which is cut sporadically into the programme. You don’t know that, but it is.”

Holly pointed out they hadn’t managed to play any games yet, which make up a good deal of the episode.

Keith agreed: “We haven’t played nay games. I don’t know what will happen to this episode.”

Well, Holly had a suggestion!

Digging into a bag of Maltesers, she joked: “I’m going to just sit here and eat Maltesers. We can play the Malteser Game!”

She then put a handful of Maltesers in her mouth, sucked in her cheeks and stared at the camera, prompting Keith to burst into laughter and disappear off camera.

Fans loved seeing Holly’s fun side and attempt at the Malteser Game, with one telling her: “You always keep my spirits up and make me laugh Holly Willoughby.”

Another said: “We love Juice. Holly. A lady after my own heart. Love crazy games like that. A pretty lady unafraid of making a fool of herself.”

A third said, “Just got to love Holly”, while a fourth wrote: “Holly is so funny!”

Juice was cancelled tonight. Big ups to all the audience for being so understanding and also to the guests pic.twitter.com/KT8ZoPmbGY

Keith also shared a video of his own, showing himself, Holly and all the Celebrity Juice guests for the episode – including Eamonn Holmes and Catherine Tyldesley – hanging out in a corridor.

There was even a glimpse of Holly’s husband Dan Baldwin, who produces the show.

Keith told fans: “We are just hanging out like naughty kids!”

Meanwhile, poor Holly had a disappointing time on Thursday’s This Morning after failing in her bid to achieve a Guinness World Record.

Holly was given a really odd challenge – to set a Guinness World Record for time taken to dress five baby dolls.

She had to complete the challenge in two minutes or less, under the watchful eye of two Guinness adjudicators.

Sadly for Holly, it wasn’t meant to be this time.

This Morning airs weekdays at 10.30am on ITV

Have you played the Malteser Game? Leave us a comment on our Facebook page @EntertainmentDailyFix and let us know what you think!