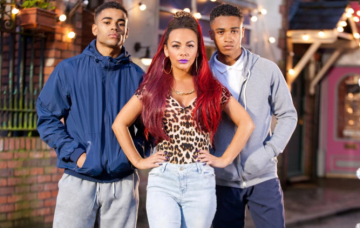 She sees herself as a McQueen

Celebrity Big Brother star Jess Impiazzi has set her sights on a role in Hollyoaks following her stint in the famous house.

Read more: Olly Murs made a beeline for Jess Impiazzi at the CBB wrap party

Jess – who has also starred in MTV’s Ex On The Beach – told the Daily Star Sunday that she’s even decided which famous family she’d like to be a part of.

She told the paper: “When it comes to my future, I’m not thinking Hollywood but maybe Hollyoaks.

“I want to be one of the McQueens!”

She added: “I’ve got an acting agent and I still go to acting school. I’ve been doing that for about eight months.
“That’s definitely a path I’m desperate to go down.”
Jess came fourth in the latest series of Big Brother which ended earlier this month.
Since leaving the house, she’s admitted wanting to leave her reality roots behind her and make a break into proper acting.
She also said that she’d quite like to do panto and can see herself as a fairy godmother.
And while Jess tries to get the attention of the Hollyoaks casting department, it seems she’s already caught the attention of someone else – a certain Mr Olly Murs.
According to reports, Olly was rather taken with Jess at the Big Brother wrap party and is keen to ask her on a date.

An insider told the Mail Online: “Olly was there but no one was sure why he there! He had the hots for Jess!”
The claim is that Olly made a ‘beeline’ for Jess at some point during the night, with the pair mixing at the raucous event.
Can you see Jess in Hollyoaks? Leave us a comment on our Facebook page @EntertainmentDailyFix and let us know what you think!
Hollyoaks continues tonight at 6.30pm on Channel 4 and 7pm on E4
Share Share Share