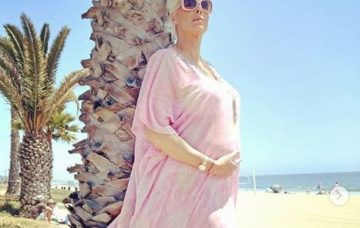 The couple have welcomed a girl!

After announcing her pregnancy just three weeks ago, Celebrity Big Brother star Brigitte Nielsen has given birth to her fifth child at the age of 54.

The actress and her TV producer husband Mattia Dessi, 39, revealed the happy news in a statement to People magazine, revealing they had welcomed a little girl on Friday 22 June.

Introducing their new daughter as ‘Frida’, the smitten couple said they ‘have never been more in love’ with the new addition to their family.

The statement continued: “We are overjoyed to welcome our beautiful daughter into our lives.

“It’s been a long road, and so worth it. We’ve never been more in love.”

Frida weighed 5lbs 9ozs, and was born in Los Angeles.

Frida is Brigitte’s first daughter, as she already has four sons, the eldest being 34-year-old Julian, who she shares with first husband Kaspar Winding.

Her other boys are 28-year-old Killean, with Mark Gastineau, and Douglas, 25 and Raoul Jr, 23, with fourth husband Raoul Mayer.

Brigitte was most famously in a relationship with Sylvester Stallone from 1985 until 1987.

The Beverly Hills Cop and Rocky star had kept her pregnancy a secret until she had reached the very late stages, only sharing her happy news with fans on Instagram last month.

In a gorgeous snap, showing her laying on a white sofa while dressed in white and cradling a blossoming baby bump, she captioned the image with a simple: “Family getting larger”.

Earlier this month, the mother of five also posted another picture of her growing bump alongside the caption: “Find what makes you happy and fight for it. #love #family.”

Her fans have inundated Brigitte with messages of support, calling her an ‘inspiration’ and offering their congratulations.

In 2011, Brigitte controversially revealed, in an interview with The Guardian, that she wanted to have another child.

“I’m 48 now and I would like to have another baby. I would love to because of all of the things I have learned. It would be like starting over again.”

But Brigitte herself did have her own doubts, questioning: “Am I too old?”

She added: “I’m young at heart and I would be different this time around. Mattia and I have discussed it but I don’t know how likely it is.”

Brigitte also raised concerns that she would be ‘selfish’ to conceive at 54.

“And to interfere with things because I feel as if I could give more to a child than I did when I was 20 – is that too selfish?” she asked.

We wish you all the happiness, Brigitte!

Do you think Brigitte is ‘selfish’ to give birth at 54? Or should women be empowered to make their own choices about their own bodies? Leave us a comment on our Facebook oage @EntertainmentDailyFix and let us know what you think!