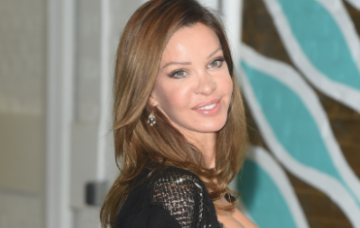 Glamour model found by daughter after tripping over toy

Celebrity Big Brother star Alicia Douvall has been hospitalised after a serious accident at her home.

The model and TV personality slipped on a child’s toy and fell down the stairs over the weekend.

She was reportedly found by her 22-year-old daughter Georgia and rushed to hospital, where she is recovering.

Alicia, a mother of two, is believed to have had an operation as a result of her injuries but is now in a stable condition, according to the Mirror Online.

The former plastic surgery addict, who appeared on reality show CBB in 2015, tweeted a picture from her hospital bed yesterday evening.

It showed her hooked up to a drip, a blanket over her legs and the privacy curtain to her bed drawn closed, with the caption: “First sunny day and I have been here!” with a crying emoji.

First sunny day and I have been here ! 😭 pic.twitter.com/HvXH5vE546

Less than an hour later, the 38-year-old wrote on Twitter: “Looks like I am about to dramatically change my life.”

Last month, she urged fellow former CBB housemate Katie Price, who went on to win the series they appeared on together, to stop going under the knife.

Looks like I am about to dramatically change my life.

Alicia, who claims to have spent more than £1 million on 350 cosmetic procedures, warned the Loose Women panellist to learn from her experience and quit.

She says she nearly died while having surgery to repair faulty breast implants.

Alicia credits the terrifying experience with giving her a wake-up call about having the operations.