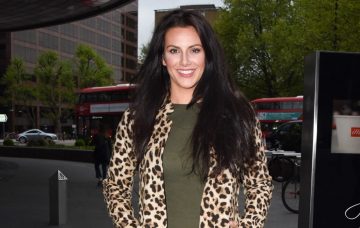 A tragic year ends with a rainbow for Jessica

Celebrity Big Brother star Jessica Cunningham has taken to Instagram to announce she’s pregnant – just months after suffering a miscarriage and losing her ex-partner to suicide.

Jessica posted a shot of framed cartoons, representing her, her three daughters, and her boyfriend Alex Daw, with one atop them all to represent the new baby to come.

“Well, it is the start of the New Year,” the caption read, “so best to start it off with how I mean to go on! WITH GOOD NEWS!!! We have a little rainbow baby on the way.

She opened up further about the pregnancy in a blog post, explaining why she was referring to the new child as a ‘rainbow’ baby.

Jessica spoke about her fears for her pregnancy as the early weeks carried symptoms she interpreted as another miscarriage.

“You see, that’s the thing with getting pregnant after a miscarriage,” she wrote.

“You are stopped from allowing yourself to fully enjoy those moments of excitement. In fact, it’s an emotional rollercoaster of constant worry of losing the baby and excitement of having a baby!”

She explains that, after seeing an inspirational post on a friend’s Facebook page, she was reminded that the first baby after a miscarriage is sometimes called a “rainbow baby” – a thing of joy coming after a storm.

“Over the past few months, it is safe to say we have had a storm and we were in need of a rainbow,” she said. “It made me stop and believe that this was our Rainbow.”

This will be Jessica’s fourth child, after her daughters with her ex-boyfriend, Alistair Eccles,

Alistair took his own life in August.

Just a couple of months later Jessica and Alex suffered a miscarriage.

She ended the post with a family shot of her, Alex, and her three daughters, and an inspirational sign off.

“Today is a day for the change, for self-belief. so believe in yourself and take over the world!!”