Warning: May contain some strong language

A mum was left gobsmacked after a CBeebies presenter appeared to drop the C-bomb during a playful song about kites.

Chris Jarvis was riding around on a scooter with purple ribbons hanging from the handle bars – it was all very lovely!

But all hell broke loose when he started to sing.

He only went and dropped the C-bomb!

The absolutely shocking scenes occured during the TV programme Show Me Show Me, which screens at around 10.30am.

Horrified mum-of-two Lyndsey uploaded a clip of the show to Facebook with the caption: “You what CBeebies?!”

The video soon went viral, sending social media into meltdown, with some attacking the Beeb, others leaping to its defence – but unsurprisingly, most found the video hilarious.

The post has received over 20k comments and has had 2.9 million views.

Lyndsey told The Sun: “I wasn’t really taking any notice of what was on the telly, which was on while I was tidying up, but then I just heard that word, so I rewound the show because I couldn’t believe it.

“And then every time I replayed it, I just couldn’t hear anything but that word.

“At first I thought it was really funny because it was just a shock, but if my little girl who’s two starts saying that in public it’s going to make me look really bad, so it’s upsetting and quite annoying – she wouldn’t know any difference.” 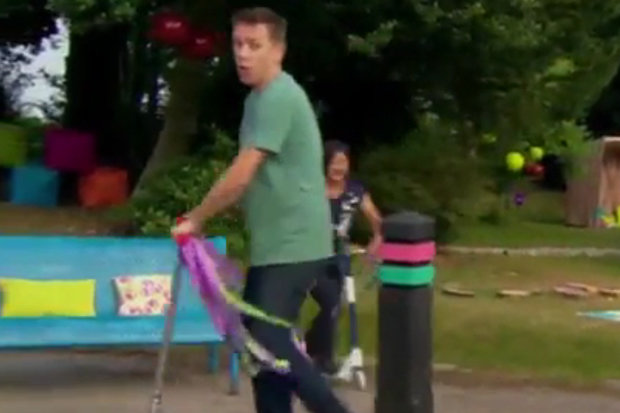 Lyndsey took to the CBeebies Facebook page in a bid to get some answers, she said: “They replied back saying ‘it’s kite, it’s kite’, but everyone agrees that it sounds absolutely nothing like that word.

“All my friends were shocked, my sister and my mum were like, ‘oh my god, I just can’t believe that is on a child’s programme.”

In response to the backlash, CBeebies wrote on their Facebook page: “It’s kite everyone, kite! We make shows for your little ones so it’s always going to be kite!”

Either way, we think we’ve found our latest insult…