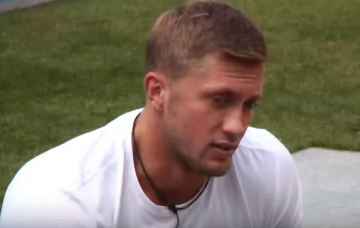 The dad of three told housemate Psychic Sally he was sacked from the ITVBe reality show and was in “a bad, bad place” in the wake of an audio recording of him threatening ex Megan Tomlin being leaked to a national newspaper.

Dan, 27, was caught saying he would “stick a knife” in the mother of his son if she slept with another man in the call, leaked three years ago.

In one recording he was heard saying: “I swear on this boy’s life I will end your [bleep] life if you [bleep] another man.”

But now the reality star – who also has two daughters with ex EastEnders actress Jacqueline Jossa – claims he has learned from the “mistake” that saw him ‘lose everything’ professionally.

Addressing the incident, he explained the reason for his presence on the Channel 5 show – themed ‘Eye of the Storm’ this year – related to his ex.

He told Sally their relationship had been “toxic” as he detailed how the fallout from the shocking tirade was reported “absolutely everywhere”.

Dan said: “We were young and it was just like a horrible relationship.

“We pushed each others’ buttons and stuff and I got angry just like everyone does and just said stupid things – and I was being recorded.”

He continued: “I mean, I said stupid things. I take full responsibility of it and you learn from your mistakes.

On Day 2, Dan and Sally had a heart-to-heart about his life experiences before entering the House. 💞
For more one-to-ones like this, make sure you join us at 10pm tonight on @channel5_tv #CBB pic.twitter.com/P1RLIl4aNF

“You’re young, you say things when you’re angry. Obviously I never meant one word of it and it’s horrible. It’s embarrassing now even, I hate it.

“I hate the fact I even done that. I mean if I could turn the clock back I would, but I can’t.

“I learned from my mistake and yeah, I lost everything from that and I was in a real bad place and like my career was done.”

Who’s going to be tuning into @bbuk tonight, 9pm on @channel5_tv to watch how Day 1 has been for Dan and the house mates?? #bigbrother #bigbrotheruk #channel5 #votefordan

Dan, who has also appeared on ITV diving show Splash!, added his career fell apart in the months following the reports.

“[I] got sacked from the show I was on,” he reflected.

“I was on a reality TV show and I lost that job straight away. I was on it for like two years and then it was just gone. Everything went.”

Although police investigating took no further action against Dan, he revealed court action was needed in order to see his son.

He continued: “And I had a baby and then I had to go to court to be able to see him and stuff and got that all sorted.

“Yeah I was in a bad, bad place back then, really bad. Depression and everything. It was horrible.”