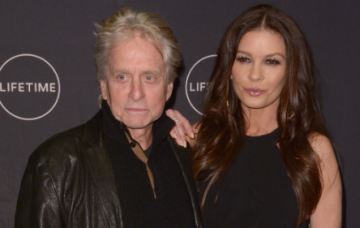 Some 20 years later, the A-list couple are still going strong

Just how cute is this snap from August, 1998 – even though Catherine admits she can’t remember what her future husband Michael was talking about!

The 48 year old actress uploaded the sweet throwback shot to her Instagram with the caption: ‘Meeting my husband for the first time at the Deauville Film Festival. Can’t remember what he was talking about😂’.

Fans of her and her actor beau Michael Douglas, 73,  were quick to show their appreciation for the vintage image, with it rapidly notching up almost 75 thousand likes.

Catherine and Michael got engaged on New Year’s Eve, 1999, and married in November, 2000. Their marriage has survived some turbulent periods, with Michael enduring tongue cancer in 2010, which Catherine later revealed caused her to have her own problems with depression.

She bravely opened up to the press about her battle with bipolar, and how she checked herself into hospital for treatment in 2011 and 2013.

She later said: “When you get sideswiped like that it’s an obvious trigger for your balance to be a little bit off – not sleeping, worry, stress.”

The pair chose to live apart for a while in 2013, but Michael said they were ‘stronger than ever’ just a year later following a reconciliation.

Catherine has recently been quite active on Insta, sharing pics of herself and her 15 year old  daughter Carys as the cover-stars of American mag Town & Country, as well as a pic of her and Michael looking very loved up and happy in their car.

“Found this guy in my car” she joked, adding two hearts to her post.

As well as her lookalike daughter Carys, Catherine also has a 18 year old son, Dylan, with Michael.

Wonder if Michael will comment on her Instagram to remind her exactly what he was going on about that night 20 years ago? We’d love to know!