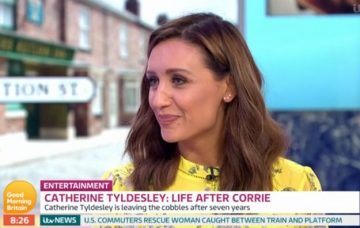 She appeared on Good Morning Britain

Corrie actress Catherine Tyldesley has opened up about the recent heartbreaking suicide storyline she was involved in.

Appearing on Good Morning Britain, the soap star revealed the real-life impact of Aidan Connor taking his own life in Weatherfield.

In scenes that left viewers in bits, factory owner Aidan died off screen after deciding to end his own life.

Catherine’s character Eva, who had recently given birth to his child, was left devastated by his death.

She now explains that the storyline helped others who felt hopeless.

She said: “I think we’re all in some way affected by suicide. Everybody knows somebody and there was a huge response, and what we have to keep in mind is that this storyline has helped hundreds of thousands of people and it saved lives.

“Shayne [Ward] and I were getting messages from complete strangers saying, ‘I tried to commit suicide’ or, ‘I’m feeling very depressed’, and in turn we’ve referred them to the right people, which is amazing.”

She also credited the Samaritans and CALM for helping with the storylines.

She added: “I just think what Kate Oates did with that storyline is just absolutely phenomenal, such an impact.”

Catherine confirmed that she filmed her last scenes two weeks ago, adding: “I’m on screen until the start of August, and there’s a lot crammed into that time, some brilliant stuff, some really good stories.”

At the moment, Aidan’s grief-stricken dad Johnny has declared war on Eva, vowing to get custody of baby Susie.

But viewers hope fan-favourite Eva will get her happy ending…

Would you like to see Catherine Tyldesley on Strictly Come Dancing? Leave us a comment on our Facebook page @EntertainmentDailyFix and let us know what you think!