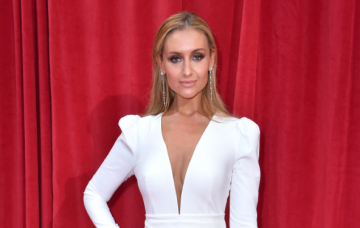 Catherine Tyldesley has appeared to throw her hat – or dance shoes – in the ring for Strictly Come Dancing now she has left Coronation Street.

The actress, who has played Eva Price on the soap for seven years, has also said she is keen to expand her career horizons and work on a “gritty drama”.

Cath told OK! Magazine of her work options post-Corrie: “I don’t watch much reality TV but the one show I do watch is Strictly Come Dancing. I adore it.

“That’s the only one I would possibly do.”

If she did appear on Strictly, Cath would be following in the fancy footsteps of other soap actors, including fellow Corrie stars Tina O’Brien and Georgia May Foote, EastEnders’ Jake Wood and Kellie Bright and Hollyoaks star Danny Mac.

She said: “I’ve started going to auditions and I’ve been put up for some really exciting jobs.

“I’d love to do a gritty drama, but I want to try as many genres as possible.”

The TV star said that leaving Corrie was “not a decision I took lightly”.

“I live ten minutes away from the studio, my friends work there and it’s a secure job, but you only get one life and I want to work on other projects,” she added.

Cath, 34, recently filmed her final scenes for the soap. Viewers are currently watching her battle with Johnny Connor over the future of her baby daughter, Susie.

She announced last year that she was saying goodbye to Corrie after joining in 2011.