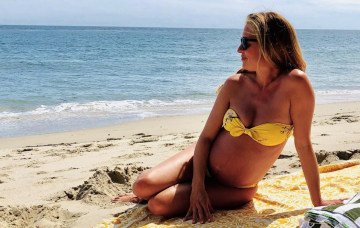 She's just about ready to pop!

Cat Deeley took to the beach and showed off her growing baby bump in a stunning Instagram shot this weekend.

The picture shows her sitting casually on the beach in Malibu, wearing a strapless yellow bikini, staring out towards the ocean.

The presenter is expecting her second child with husband Patrick Kielty, and could be giving birth any day now.

Cat, who lives in Los Angeles, seemed keen to grab as much of beach life as possible before the baby arrives.

She also posted a video to Instagram Stories, showing her pointing out to the ocean looking for dolphins.

Cat revealed in March that she hadn’t told Milo that he was about to become a big brother, as she was waiting until the new baby’s due date was closer.

“I want to tell him when it gets a bit closer and he can get excited and understand it, but right now, he doesn’t even notice, actually,” she told Entertainment Tonight.

“He’s got something to lean on right now, when I read him stories. He can cuddle it, but he hasn’t said anything.”

She also said that she and Patrick hadn’t decided on a name for the new baby yet, saying they usually couldn’t agree.

Cat claimed she expected to win the name in the end, as she’s the one who’s done all the hard work.

Sounds fair to us!

The star found fame in the UK presenting kids’ programmes including SM: TV and CD:UK, as well as talent shows Fame Academy and Stars In Their Eyes.

She then moved to Los Angeles, where she became a household name in the US, hosting So You Think You Can Dance? for which she’s been nominated at the Emmy Awards five times.

What’s your pick for a baby name? Leave us a comment on our Facebook page @EntertainmentDailyFix and let us know.