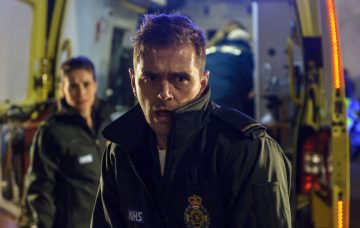 Casualty SPOILER: Who will die THIS Saturday?

It's going to be explosive - literally!

One of Casualty’s most explosive episodes is just around the corner – and the lives of several of the BBC show’s characters will hang in the balance.

Last week’s episode ended with a dramatic cliffhanger when Iain’s ambulance overturned – with Alicia and Ruby inside.

After an emotionally-charged scene between Alicia and Eddie, where she finally confronted him about raping her, he lashed out in anger – throwing her through a patio window.

When paramedics Iain and Ruby arrived to assess the situation, they saw that Alicia was losing a lot of blood and rushed her to hospital.

But the nightmare was just beginning, as the ambulance suddenly overturned with the three of them inside…

As Ruby tried to get to her feet to check driver Iain and patient Alicia were okay, the vehicle appeared to be hit by something big.

And the end credits rolled. Gulp.

On Saturday (11 August), the drama picks up where we left off – and luckily Iain is okay. But for how long?

He breaks free from the wreckage and immediately tries to help, but is horrified to see the motorway accident that surrounds him.

Even more so, when he recognises one of the bodies lying in the road and realises that the accident was in fact his fault in more ways than one…

It appears that Iain swerved to avoid someone jumping from a bridge but, in doing so, caused a major accident.

Luckily, Sam arrives in another ambulance and the pair attempt to help the injured patient. But it’s obvious she’s in a very bad way.

As they fight to save her life, a fuel tanker caught up in the crash goes up in flames in a shocking explosion.

Will everyone get out alive?

The BBC medical drama is in its 22nd year and promises this is one of their “biggest episodes ever”.

They have also teased that it’s the “end of the road” for one character.

Fans have been wildly speculating, thinking that Alicia or Ruby are in the most danger.

One worried viewer wrote: “I still genuinely think it’s Alicia or Ruby, because of what Sam says [in the trailer], something like ‘There’s still someone in there’, but we’ve seen Iain leave the ambulance.”

And many fans lamented that they still weren’t over Jeff dying in 2014… Oh don’t get us started again, we’ve only just stopped crying!