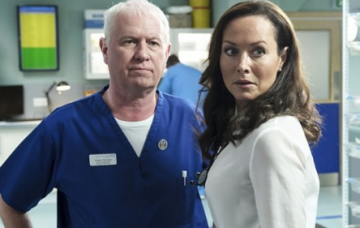 Neil Clifton - aka Ben Cartwright - has a hospital emergency...

Soap fans thought they’d seen the last of Coronation Street villain Neil Clifton for the time being… But they were wrong!

It’s not Neil, but his alter ego – actor Ben Cartwright – who appears on our TV’s again this weekend.

And be prepared to really like his character – well, it had to be an improvement on Neil!

Ben portrays loving father Felix Barstow, who rushes to Holby ED when his son Aden is admitted after being beaten up.

And Felix is shocked to hear his son has been the victim of a vicious homophobic assault.

Widower Felix is heartbroken that his son couldn’t confide in him about being gay, and desperately hopes that he pulls through after being “very badly hurt”.

With his life hanging in the balance, Elle wants to wait for Aden’s results, while Connie wants him operated on immediately!

Will he pull through?

While 39-year-old Ben is probably best known for his role as corrupt copper Neil Clifton in Weatherfield, he’s actually previously appeared in EastEnders and Doctors.

And this will be his fifth appearance as different characters in Casualty since 2005.

Elsewhere in the BBC medical drama, Alicia finds herself on a collision course with Bea after deciding not to report her rape.