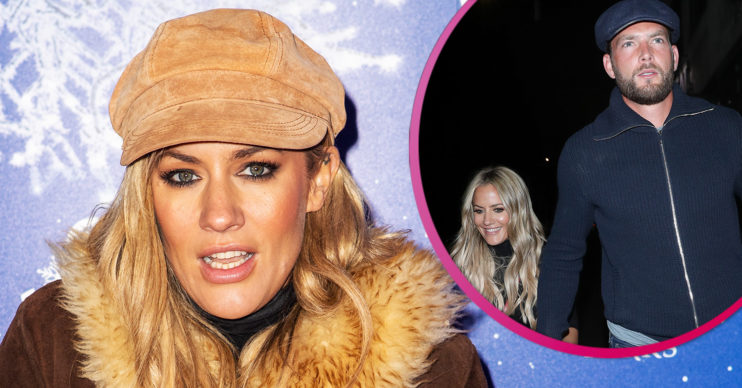 Caroline was arrested and charged with assault in December

Caroline Flack was found “naked and covered in blood” by police during her arrest.

The Love Island host was arrested and charged with assault by beating in December following an alleged fight at her home with boyfriend Lewis Burton.

She was due to stand trial in March after pleading not guilty however, she took her own life in February.

An inquest into her death resumed at Poplar Coroner’s Court in London on Thursday morning (August 6).

Caroline Flack was ‘naked and covered in blood’

Detective Inspector Lauren Bateman, of the Metropolitan Police, gave evidence at the hearing.

Ms Flack was naked and covered in blood.

The court was also given a police briefing document, given to officers involved in the case after Caroline’s arrest on December 11 last year.

The document stated: “Ms Flack was naked and covered in blood. She was bleeding from an injury to her left wrist.

“Mr Burton was in boxer shorts. He said he was suddenly woken by her hitting him on the head by the object with some force…

“Ms Flack made numerous admissions to the assault in the presence of officers.

“They included: ‘I hit him. He was cheating on me.’ At this time it is unclear what object was used to assault Mr Burton.”

It continued: “He assumed it was a desk fan or a lamp.

“Ms Flack’s phone has been seized as it had a significant amount of blood on it and a crack in one of the corners suggesting this may have been the weapon.”

Burton told police he didn’t want to proceed with a complaint against her.

What did Caroline Flack tell police?

The court heard that at the scene, Caroline told officers: “I did it. I whacked him round the head, I admit I did it, I used the phone.

“I had his phone in one hand and mine in the other, I whacked him round the head.

“There was no excuse for it. I admit I did it.”

Meanwhile, in an interview, DI Bateman said Caroline claimed she “flicked” Lewis in a bid to wake him up.

She believed she may have dropped the phone on his head however didn’t think she caused the injury.

In addition, the court heard that in her interview with police, the presenter said: “I admit I did it. I never hit him over the head.

“He was never hit over the head. It was reckless. I whacked him. It wasn’t aggressive. The whole thing feels very blurry.”

DI Bateman added: “The injury [to Burton] was a cut to the forehead. I would say that wasn’t necessarily minor.’..

“I felt in these circumstances it was not a minor offence. Mr Burton was asleep at the time. It was an unprovoked attack while he was defenceless.”

On Wednesday (August 5), the court heard that one of the paramedic crew found a handwritten letter placed on the coffee table.