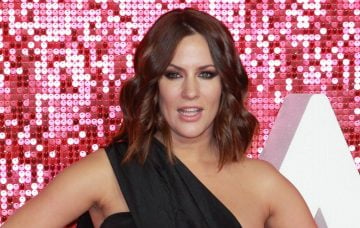 Caroline Flack has got fans excited by revealing she’s launching her own fashion range with River Island.

The Love Island host, who announced her engagement to Celebrity Big Brother’s Andrew Brady three days ago, took a break from her loved-up engagement holiday to share the big news on social media.

Caroline, 38, uploaded a short video to Instagram which showed a pair of legs – presumably her legs – strutting around in different outfits.

She captioned the clip: “I HAVE MEGA NEWS. SO EXCITING.”

I HAVE MEGA NEWS . SO EXCITING #riverisland

Caroline tagged high street fashion brand River Island into her Instagram caption, and added on Twitter: “SO EXCITED to announce I’ve designed my very own collection with River Island.”

The Instagram video teased “coming May 30” so we may have to wait a while for more news.

Nevertheless, fans were excited, with plenty leaving comments on Caroline’s post ranging from “amazing” to “exciting” and “YESSSSS.” 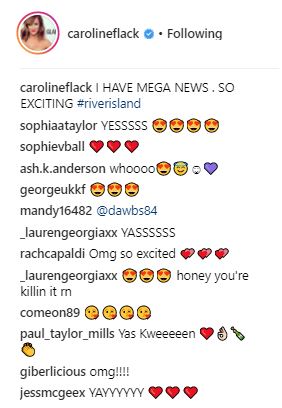 According to Look magazine, the former Xtra Factor presenter has designed a 19-piece collection which will feature maxi dresses, separates and accessories.

It’s been a big week of announcements for Caroline, who revealed on Saturday night that she’s engaged to boyfriend Andrew.

Caroline shared the happy news via a cute pic of herself and former Apprentice star Andrew, 27, alongside the diamond ring.

Unfortunately for Caroline and Andrew, not everyone was kind about their engagement, with some accusing the couple of a publicity stunt.

Others claimed Caroline and Andrew had rushed into things as they’ve only been together for three months.

Caroline took to Twitter overnight for a rare rant about her personal life, defending Andrew and telling critics to mind their own business.

She was particularly irked by one newspaper article that referred to her new fiancé as a “desperate reality TV Z-lister”. Ouch.

Caroline responded: “I don’t like to speak up on things. But. He’s my boyfriend. And he’s lovely to me. He’s new to this world. No one is perfect. But he (sic).”

The star added: “Give people a break …. we all [bleep] up… all of us … people spend so much time over analysing things … let it be.”

She didn’t address what she meant by people making mistakes, but there were claims earlier in the year that Caroline and Andrew briefly split over rumours he had been unfaithful.

However, neither Caroline nor Andrew ever confirmed that was true.

Caroline also shut down the negativity she and Andrew have received since news of their engagement broke.

She said: “And while all you weirdos are taking time to write mean comments about someone you don’t know …. I’ll get back to my love nest.”

It’s believed Caroline and Andrew met in February after his stint on CBB.

This will be a VERY busy year for Caroline. Not only will she have wedding planning and her fashion range, she’s also got the new series of Love Island starting in June.

Are you excited about Caroline’s new fashion range? Leave us a comment on our Facebook page @EntertainmentDailyFix and let us know!