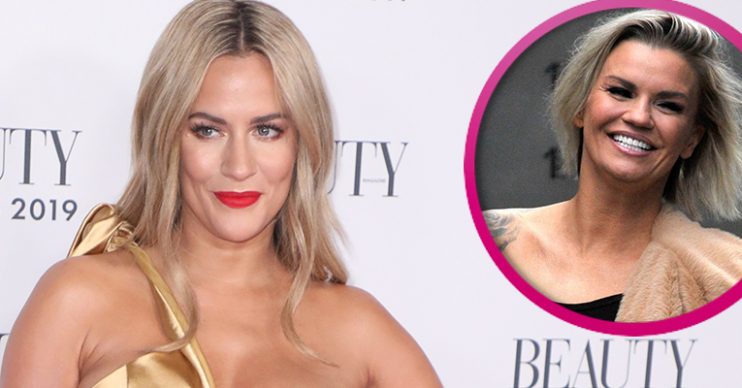 Former Love Island host Caroline Flack is said to have found an unlikely ally in the shape of mum-of-five Kerry Katona.

Caroline is currently out in Los Angeles battling her demons ahead of her March assault trial.

She has pleaded not guilty to hitting boyfriend Lewis Burton around the head with a lamp while he slept before Christmas.

Now Caroline – who stepped down from presenting the first-ever winter Love Island – has had support from what some are calling an unlikely source.

Former Atomic Kitten singer Kerry has said that she sympathises with Caroline because she knows how it feels to have your personal life played out in the press.

No one knows what went on behind those closed doors. I am not going to judge Caroline at all.

Kerry told The Sun: “It makes me angry at how this industry works. No one knows what went on behind those closed doors. I am not going to judge Caroline at all.”

She also said that, while she “applauds” Ant McPartlin for “pulling it back” following his career crisis, she isn’t convinced Caroline will be allowed to do the same because she’s a woman.

Read more: Strictly’s Kevin Clifton hints his days on the show could be numbered

“Within eight months of him crashing his car under the influence, into another with a little girl in it, he is winning awards. Then there’s me on This Morning, slurring my words due to mental health medication. I am still to this day crawling back up that ladder,” she said.

Kerry added: “I think with Caroline it’s different because she’s a woman. When we mess up, we have a hard time with it.”

She also had some words of wisdom for her new pal, revealing if she were Caroline she wouldn’t be watching Love Island as Laura Whitmore is doing too good a job and Caroline would worry they wouldn’t take her back.

Show bosses have said, however, that the door remains open for Caroline to return to the show.