Singer Olly Murs, who presented The Xtra Factor and The X Factor alongside Caroline Flack has paid tribute to his former co-host.

News of Caroline's death broke yesterday evening, with a spokesperson for her family releasing a statement shortly afterwards.

It read: "We can confirm that our Caroline passed away today on the 15th February.

"We would ask that the press respect the privacy of the family at this difficult time."

This will hurt forever, love you cazza, Your Ols.

Tributes have poured in for the late star and now Olly Murs has posted a message to his former partner in crime on Twitter and Instagram. 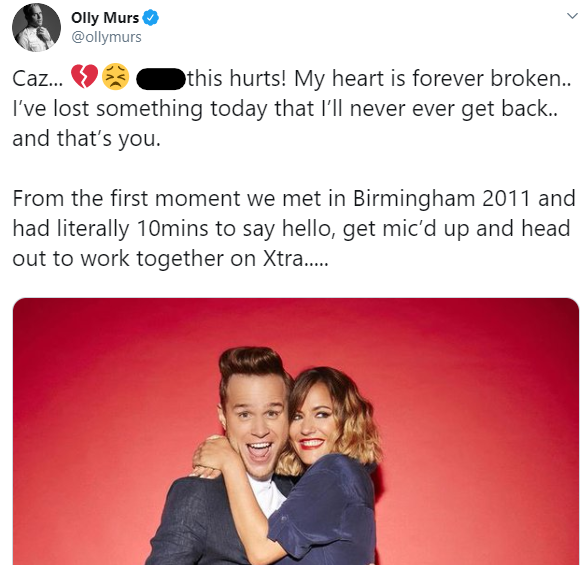 We never stopped laughing, flirting (who can forget that), eating cheeseburger chasers, singing (which I always loved hearing), the arguments (which I never won), the disagreements on what jokes to say or what outfits you should wear, these are the moments I’ve always cherished..

...but right now as I write this it’s hit me I won’t have them moments again. I haven’t stopped crying since the news, after we stopped working together in 2015 we didn’t see each other as much as we should have but we always spoke on the phone or messaged plus whenever....

... I did see ya out and about, like a sister we’d just kiss and make up and was back being us every single time. I remember messaging you at your toughest time to let you know that I never read or listened to any of the crap people were saying about you...

... I was just worried about my friend. I always knew how fragile you were but I never ever thought this would be the last contact we would have. We always said we was friends for life and trust me you will be with me forever....

...My kids will know you, my grandkids will and then I’ll see you again, give you a huge hug, a huge kiss, get mic’d up and have you by my side again.

This will hurt forever, love you cazza, Your Ols 💔🙏🏻😖

Olly and Caroline first hosted spin off show The Xtra Factor together from 2011 to 2012. As a result of the flirty banter they were so well known for, fans often thought Caroline and Olly would be a good match and wanted them to get together, but the pair always insisted they were just the very best of friends.

Others stars have also paid tribute, including Holly Willoughby who said the news was "utterly heartbreaking".

And Ant and Dec, who worked with Caroline when she hosted I'm A Celebrity... Get Me Out Of Here! Extra Camp between 2009 and 2010, said they were "beyond sad".