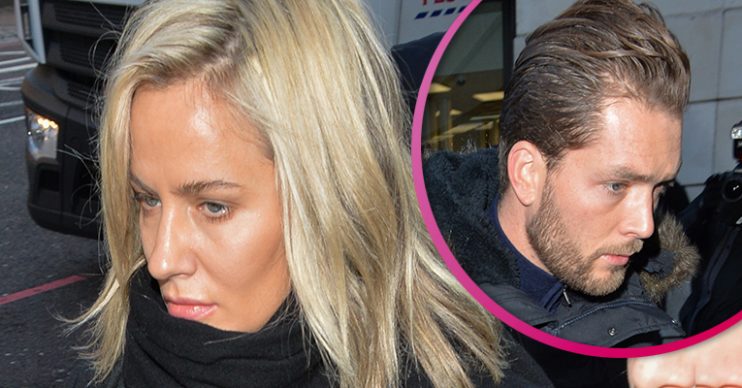 They both arrived separately at court on Monday morning

Caroline Flack and her boyfriend Lewis Burton have unfollowed each other on Instagram, hours before they were due in court over an assault charge.

The Love Island presenter, 40, no longer has Lewis, 27, as a follower on the social media site.

Yesterday, Caroline revealed that she was going through the ‘worst time of my life’ after she was arrested and charged with assault following an incident with her model partner.

She wrote: “This is the worst time of my life. I don’t know where to go to. Where to look. Who to trust. Or who I even am.”

Despite the charge, Lewis has publicly showed his support to Caroline, describing her as loyal and kind.

Over the weekend he shared a throwback image of Caroline on Instagram, showing her sitting at the back of a plane alongside the caption: “I love this girl. Take the backseat darling.”

Last week, the TV host was forced to step down as anchor of Love Island for the winter series beginning in January; she will be replaced by friend Laura Whitmore.

Caroline admitted she was “glad” that Laura took over her role on the reality show.

She was charged with common assault after a 5am bust-up at the flat she shares with Lewis in Islington, North London.

A Met Police spokesperson said in a statement at the time: “Caroline Flack, 40, of Islington was charged on Friday, 13 December with assault by beating. She will appear on bail at Highbury Corner Magistrates’ Court on Monday, 23 December.

Days later, Caroline announced she was stepping down from series six of Love Island, which begins next month.

She said in a statement: “In order to not detract attention from the upcoming series I feel the best thing I can do is to stand down for series six.