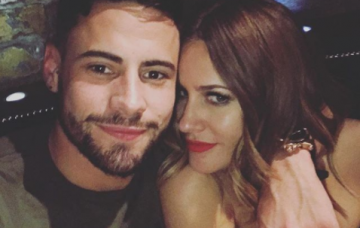 Caroline Flack’s romance with Celebrity Big Brother contestant Andrew Brady was recently rumoured to be on the rocks – but look at what she’s just revealed.

Love Island host Caroline has seemingly proved all is well by accidentally showing off a new tattoo, believed to have been done in honour of her boyfriend.

Despite only dating for two months, it appears 38-year-old Caroline has had Andrew’s initials and a little pair of glasses inked onto her right wrist.

And although she hasn’t officially unveiled her body art on social media, eagle-eyed fans have already clocked it.

Caroline attended a glitzy award ceremony on Thursday evening and later posted a picture on Instagram that showed her holding up a gong.

Peeking out from under her dogtooth print jacket was the tattoo.

One fan wrote: “Seen the initials on her wrist!” Another added: “A.B tattoo?? noooooooooo @carolineflack.”

A third commented: “Wait…..is that an A.B. tattoo on the wrist?”

Caroline has not responded to fans.

The new tattoo has come just two weeks after it was claimed that Caroline and Andrew’s relationship had already fizzled out.

Sources claimed to The Sun, that Caroline had instigated the split amid rumours that Andrew had been unfaithful – allegations he strongly denies.

Neither Caroline nor Andrew’s reps responded when Entertainment Daily contacted them for comment. Something tells us they are still going strong!

Meanwhile, we recently told how Love Island bosses have been inundated with applicants from wannabe 2018 Islanders.

However it has been claimed there will be a new rule in place when the next series kicks off – no previous reality stars allowed!

What do you think of Caroline’s new ink? Leave us a comment on our Facebook page @EntertainmentDailyFix and let us know what you think!