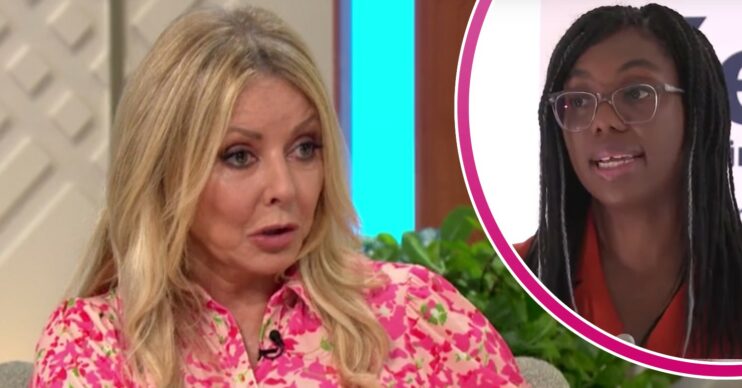 Carol Vorderman has lashed out on Twitter after legislation designed to protect against trolls and abuse was shelved by the Government.

The Online Safety Bill has been shelved, with Conservative party leadership hopeful Kemi Badenoch claiming it “is in no fit state to become law”.

The former Levelling Up minister added on Twitter: “If I’m elected Prime Minister I will ensure the bill doesn’t overreach. We should not be legislating for hurt feelings.”

However, her comments have come in for a torrent of criticism on social media.

And among those outraged is Carol. Of course, she is currently filling in on Lorraine on weekday mornings.

This afternoon Carol tweeted about the bill dropping down the agenda. In addition, she also shared a response from the Institution of Engineering and Technology.

She told of her ‘deep concern’ that work by charities against “vile abuse” could be ignored.

In a separate tweet, Carol made her position on Ms Badenoch’s approach very clear.

She fumed about how “appalled” she is that she described the impact of online abuse as “hurt feelings”.

I’m appalled that Tory MP and candidate for Prime Minister @KemiBadenoch describes the results of online bullying, harassment, and vile targeted abuse of children and adults which results in trauma, depression, and suicide as “hurt feelings”. Disgraceful. https://t.co/tF7LmUH8fl

Carol’s fans gave her their backing.

“I’m really left for words these days! Someone needs to give their heads a flippin’ wobble!” one fan replied.

Meanwhile, another agreed: “I have no words.”

Carol then responded to that person in turn: “But speak them loudly. They are worth saying now.”

As of Thursday afternoon, Ms Badenoch is polling fourth out of five MPs bidding to be party leader.

She trails Rishi Sunak, Penny Mordaunt and Liz Truss but is ahead of Tom Tugendhat.