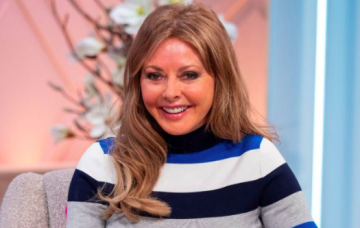 We think she's going to do great

There are not many people who could fill Lorraine Kelly’s shoes, but Carol Vorderman is one.

This coming week, the veteran TV star is covering for Lorraine, 58, on her morning show, and now Carol’s opened up about her long-term friendship with the presenter.

“I met Lorraine back in the 80s when we both wore shoulder pads and had VERY dubious hairstyles,” says the 57-year-old Countdown star, who is filling in for Lorraine from Monday 22 to Friday 26 October.

“We both cringe at those photos! For my first show on Countdown, I had curly dark hair and blue eyeshadow! I was so petrified when I went into makeup, I just let them do whatever they wanted, and I was given the local newsreader look of the day.

She added: “I worked on the Wide Awake Club, the Saturday morning children’s show from TV-AM. I met Lorraine and Steve [her husband] at TV-AM. I knew Timmy Mallett very well too.

“So Timmy, Lorraine and I with our husbands/wives all lived out near Maidenhead through the 90s, and saw quite a bit of each other. Rosie [Lorraine’s daughter] and my daughter went to the same little primary school!”

Speaking about her new job in the hot seat, Carol added: “It’s going to be an absolute joy. I’m going to have such a laugh. Lorraine is always smiling. You know as a viewer that the programme cares about you, it’s never nasty, but it’s entertaining and caring.

“I’m so looking forward to it. I will be the temporary caretaker for the deputy, who is Christine [Lampard], for the boss – who is the one and only Lorraine Kelly!”

The mum-of-two to Katie and Cameron also talked about how she’s too experienced to get nervous these days.

“I’m an old, old hand at this, so I don’t get nervous. I hosted Loose Women for a while and I’ve done live TV for decades really, plus I do a fair amount of radio now too. In fact, I enjoy live television.

“My friend Lorraine is so amazing and leads the field in daytime shows. There aren’t many of us who have been consistently around for such a long time. I’ve been on TV more or less every day since 1982, apart from the last couple of years.”

The Rear of the Year winner also encouraged viewers to vote for her friend at the National Television Awards, saying: “Well done Lorraine! She’s a legend of broadcasting, who remains top of her game.

Watch Lorraine ITV, weekdays 8.30am – 9.25am and vote for the show in the Daytime category at this year’s National Television Awards at www.nationaltvawards.com

Lorraine returns on Monday 29th October, and she’ll be sorely missed. But we can’t wait to see how Carol gets on in the meantime.

Do you think Carol will do well covering Lorraine? Leave us a comment on our Facebook page @EntertainmentDailyFix and let us know what you think.