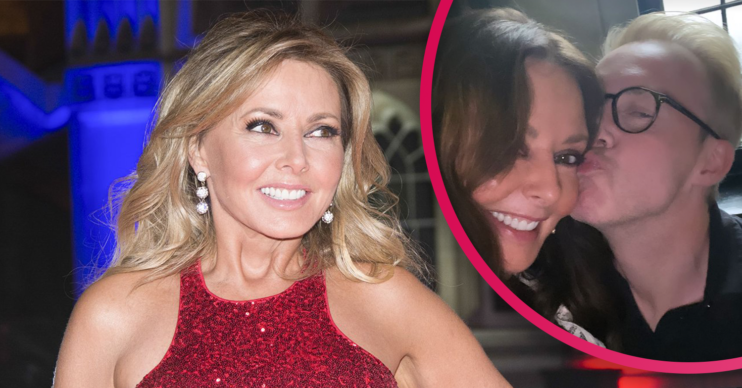 Carol Vorderman on Twitter: Star divides fans as she shares pictures of her night out

'You should know better'

Carol Vorderman divided her Twitter followers as she shared pictures of her night out.

Former Countdown host Carol headed out on the town with her “bois” and was pictured hugging and kissing her pals.

And, while some said it looked like she had a whale of a time, one follower highlights a bit of an issue.

And it sounds like a heavy night as this morning (May 30) she admitted to a “hurty head”.

“Finally got out a bit in Cardiff last night with my bois,” she said, revealing she’d been to the Golden Cross bar.

Carol added: “Such a laugh….got a bit of a ‘hurty head’ this morning  and I’d do it all again without question.”

In the pictures she shared, Carol was seen hugging and kissing her pals – Ian “H” Watkins, rugby star Gareth Thomas and a mystery man she called “gorgeous Steve”.

She also posted the pictures to her Instagram Stories.

What did fans say about the night out?

It’s safe to say fans were a little divided over the night out.

One posted: “Looks like a great night, very lucky guys to get that close to you, you are so very beautiful.”

Another echoed the same sentiment: “Lucky blokes,” they declared!

Others commented on how amazing Carol looked in her monochrome ensemble – which was a little see-through in the selfie she took ahead of heading out for the night.

“You look absolutely stunning Carol, hope you had a great night!!” said one fan.

“Looking on fire as usual,” said another.

What was Carol’s follower upset about?

However, not everyone was impressed with Carol’s antics on her night out.

They pointed to social distancing rules still in place in Wales.

In Wales, rules state that, while you can drink indoors at a pub in a group of six, you shouldn’t hug anyone who isn’t part of your bubble”.

As a result, Carol’s follower told her she “should know better”.

“I am sorry to be a curmudgeon but in Wales you are not allowed to hug anyone who is not in your bubble and should maintain social distancing,” she said.

“You are a scientist Carol, you should know better.”