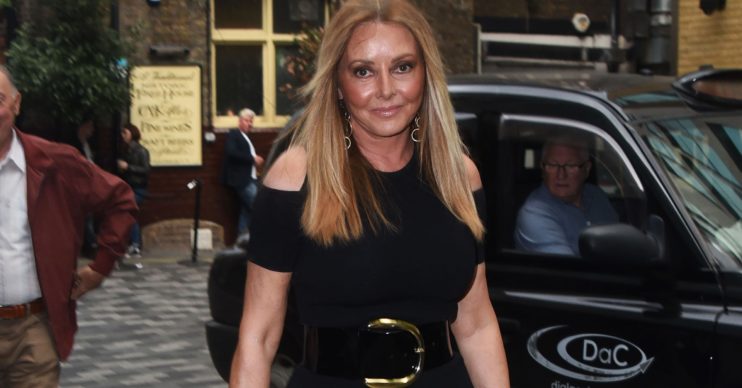 The TV host was frightened and upset after the incident

TCarol Vorderman was left in tears and visibly upset earlier this morning after an encounter with two paparazzi outside her home.

The former host of Countdown and Loose Women posted a couple of videos on Twitter which show the frightening incident and said it was ‘harassment’.

As she left her house in Bristol on Saturday, Carol spotted two photographers, one in front of her on the pavement and the other on the opposite side of the road.

Writing alongside the video, Carol said: “I came out of my house to go to my car first, saw them and said ‘you’re harassing me’. They were then after the “cross Carol” pic.

“I went back inside to have a think and so I filmed them. There’s one nice pap in Bristol who is respectful. Not these two. It frightened me tbh

To the noise of the cameras’ shutters clicking, she walked towards one of the paparazzi, and Carol muttered “thank you” in bid to make it stop.

The photographer said, “We tried to do it in the studio,” but Carol interrupted him sternly, “No, you don’t OWN me!”

The unnamed man replied, “No I know I don’t, but you’re a celebrity”. An exasperated Carol then got into her car, responding, “Ugh! As if I didn’t know!”

The photographer walked off, saying, “We would have preferred to have done it in Cardiff but you weren’t there.”

Read more: Carol Vorderman stuns fans as she shows off her new look

However, within minutes,  Carol felt so unhappy by the incident that she stopped driving and recorded a tearful video showing her much it had upset her.

In the brief clip, she said, struggling to compose herself: “I’m on my way to Cardiff to do my radio show and I’ve pulled over and put my engine off and everything. It’s really upset me and I don’t normally… you know… I hope nobody uses the photographs, that’s all I’m saying.

Managing to raise a small smile for her 440,000 Twitter followers, she ended by saying “Thank you for listening.” Carol then posted that she would be taking the matter further and getting the police involved.

I will report the two paparazzi to the police later. I don’t expect they will be able to do anything (not their fault and they have bigger things to think about) but at least then it’s logged
Meanwhile….chin up ❤️❤️❤️ and thank you for yr kind messages. They mean a lot 😘 pic.twitter.com/rjza8DDn3r

Ironically, today should have been a happy day for Carol. She is celebrating the first anniversary of her Saturday lunchtime show on BBC Radio Wales.

She posted last night: “I’m so lucky to work there. Everyone made me feel part of the family right from the start, not in celebrity nonsense ways, in properly happy Welsh ways. Yes, I am the luckiest woman in the world.”

What a difference a day makes.