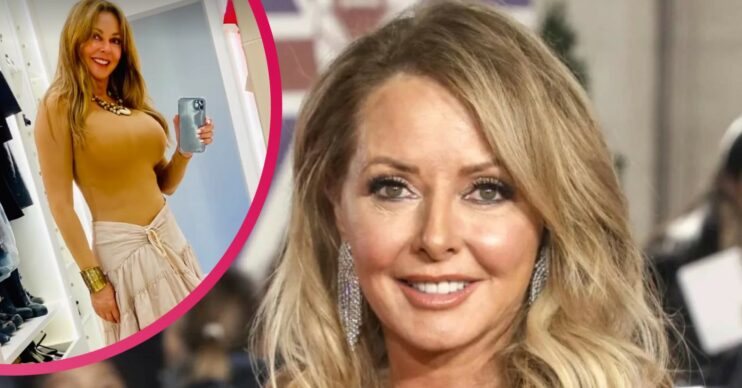 Check out her boots!

The former Countdown star told followers on social media she couldn’t wait to saddle up for her shift on BBC Radio Wales.

And Carol certainly seemed kitted out to saddle up, as she gave everyone a twirl to show off her ‘cowgirl’ fashion.

Carol settled on a dazzling look that certainly came with plenty of pioneering spirit.

As well as a sandy-coloured, long-sleeved top, she wore a country-style cream, billowing skirt.

She accessorised her appearance with a heavy bangle that matched a golden necklace.

But it was her footwear that really made it look like she’d just stepped out of a saloon.

“Cowgirl style and off to work with a coffee,” she commented on her post.

How did Carol’s fans react?

Thousands of admirers were suitably impressed with how Carol was (suited and) booted up.

However, it seems other aspects of her appearance may have commanded more of the attention of many of her followers.

Cowgirl style and off to work with a coffee.

On the other end of the response scale, some commenters seemed to more interested in her drinking receptacle.

“That Starbucks thermos is one of the best designed pieces of kit I’ve ever owned,” one fan replied in a most unlikely manner.

“Had it for 13 years. It has survived multiple deployments and flown with me all over the world. Keeps stuff hot for hours!”

Carol gets the GIF treatment

But among all the smutty responses, there were some fans who felt their message was best expressed with a GIF.

And one GIF that featured more than once showed a brief reaction from Jim Carrey film The Mask.

It show the jaw of Jim’s cartoonish character drop entirely onto a table to represent ‘jaw-dropping’.