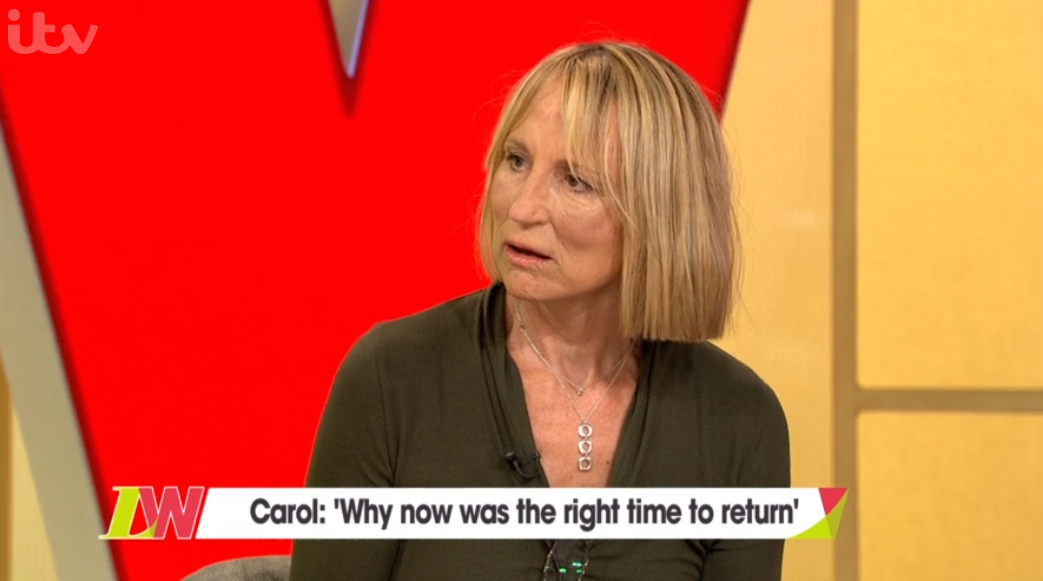 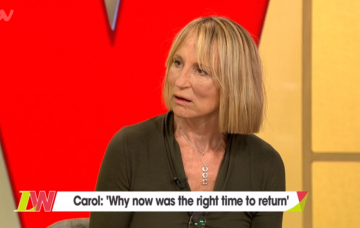 She was diagnosed back in 2014

As she made her triumphant return to Loose Women as a guest panellist on Thursday, Carol McGiffin gave an update on her health.

The legendary panellist was diagnosed with breast cancer in 2014, just a year after she left the daytime show.

Carol then underwent a mastectomy and rounds of chemotherapy, which she said was “pretty brutal”.

Speaking about her cancer diagnosis, Carol told her fellow panellists: “Early 2014, [I was diagnosed just after Celebrity Big Brother].

“Then I had a year of chemotherapy and radiotherapy and it took about two years to get that out of my system because it was pretty brutal.

“Then last year I lost my sister to cancer, which was horrible and really sad. Another bad year. My older sister, she lost her partner as well [to cancer].”

Speaking about losing her hair during chemotherapy, Carol admitted it “didn’t bother” her at all.

She said: “The mastectomy was OK. But the chemotherapy. I lost all my hair. That didn’t bother me at all. I never really cared about my hair that much.

“I thought, it will grow. Actually it was quite nice to not have to brush my hair every day.”

She added: “Having the chemotherapy and walking out of the hospital and just feeling like someone had injected poison into your blood veins, which is actually what it is.

“Everyone that worked there made it so much easier, I almost looked forward to going there.”

Carol said now that she has overcome her battle with cancer, she’s looking forward to getting back to her old self.

She revealed she’s now planning to have reconstructive surgery this year.

Carol explained: “It’s all part of feeling normal I suppose. After you’ve had all that, you don’t know what normal is anymore.”

The telly fave said she had a facelift three weeks ago to “make myself feel better about myself looking in the mirror”.

She added: “I’ll get that [points at her breasts] back, which will be great because I’ll be able to walk around with really no clothes on again, which will be good, for me, good for [my fiancé] Mark [Cassidy].”

Speaking about Mark, Carol said he was “absolutely unbelievable” when she had cancer.

She gushed: “I’m still with Mark, can you believe. He is amazing. He’s still with me. I’m a nightmare anyway. I don’t know how he puts up with me, seriously.

During the show, Carol also thanked the NHS as it celebrated its 70th birthday.

She said: “I can’t thank them enough. I was in hospital for quite a bit. I always felt like it wasn’t enough to just walk out and say thank you.

“I know that’s all they want really and they’re all doing their job in the same way everybody does, but it didn’t seem enough.”

She added: “It seems really odd to say it, but when I wasn’t in hospital I really kind of missed it. I felt so looked after and so safe. It was like a big comfort blanket.”

Have you missed Carol on Loose Women? Leave us a comment on our Facebook page @EntertainmentDailyFix and let us know!