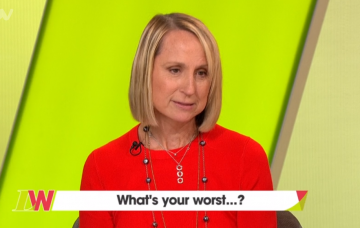 Carol McGiffin had to move seats on Friday’s Loose Women because her red top blended in with the studio’s bright red background.

The panellist, 58, swapped seats with Nadia Sawalha after viewers got in touch with the daytime show to tell Carol that she looked like a “floating head” because of the colour clash.

After the programme returned from a break, Kaye Adams explained why Carol and Nadia had changed seats.

Kaye told viewers: “Now Carol has asked if she can sit next to me because I’m obviously the most sensible person on the panel.”

Now sitting in the second seat, Carol replied: “No I did not. I’ve never sat here before and it’s terrifying!”

Kaye continued: “Lots of you got in touch to say she did actually look like a floating head so we’ve moved her here.”

One person said: “Carol McGiffin shouldn’t be wearing red while sitting in front of the red W on #LooseWomen – looks like a floating head!”

Another agreed: “Think carol might want to move seats – she’s a floating head!” 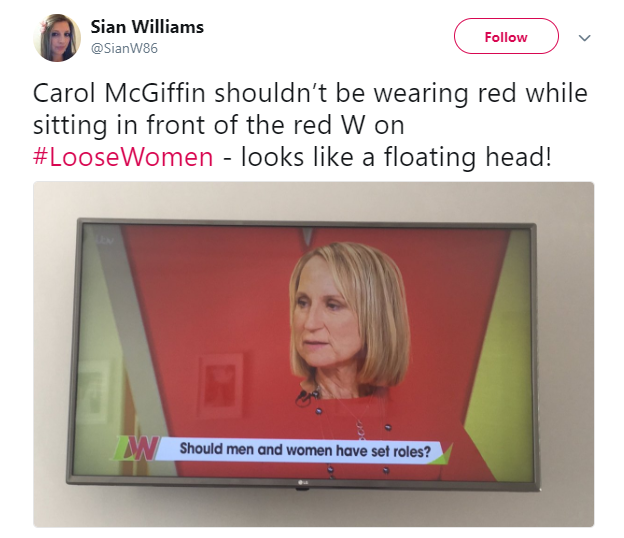 Meanwhile during the show, Carol stunned her fellow panellists after revealing she once broke into a graveyard to have sex!

She explained: “I’ve got a terrible habit of wanting to have sex while trespassing.

“Not now, when I was younger I used to break into places and have sex with people.

“So one time we broke into the grounds of a church. I know it’s really naughty.”

When asked what area of the church, Carol said: “The graveyard. We got chased by the police because someone reported us. That was the brush with the law.

“It was the worst sex ever because he was really short and he wasn’t really interested. I don’t even think he wanted to have sex with me. I was like, ‘come on, let’s do it.'”

She then added: “It was awkward because I was wearing the worst outfit, which was pink, woolly thermals.”

But her revelations didn’t stop there as Carol later revealed she once kissed a taxi driver who didn’t have any teeth.

During a game segment on the show, Carol was asked what her “worst kiss” was.

Explaining her taxi situation, she told her fellow panellists: “Obviously I knew him and I got outside.

“And gave him a kiss and I didn’t actually realise, because he’s always sat there [the front], I didn’t realise he didn’t have any teeth.”

Can you relate to any of Carol’s stories? Leave us a comment on our Facebook page @EntertainmentDailyFixand let us know what you think!