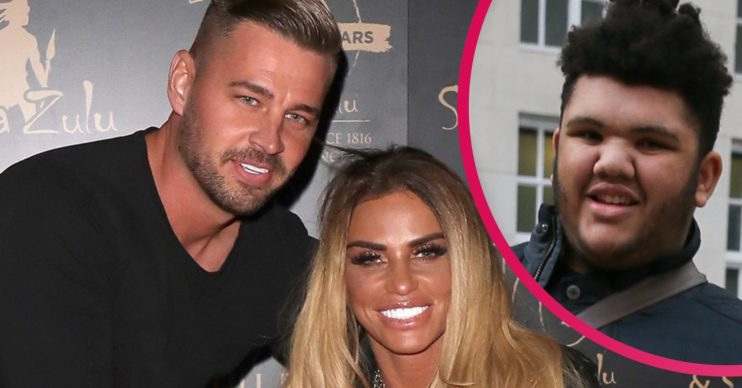 Carl Woods – the boyfriend of Katie Price – has been rushed to hospital after breaking his hand in three places.

Carl slipped in the gym and dropped a heavy dumbbell onto his hand.

Luckily he was rushed to A&E where he was bandaged up and told he will likely need an operation.

His partner Katie Price, 42, reportedly stayed the night at the hospital.

A source said this is a nightmare scenario for the pair.

Katie has limited mobility herself after breaking both of her feet in Turkey last summer.

And now Carl will only be able to use one of his hands – likely preventing him from driving.

The source told The Sun: “This is the worst possible situation for the pair – they’re now both struggling with severe injuries.

“Carl has broken three bones in his hand and has had to have his whole arm put into plaster and is now facing an operation to get it fixed.”

Adding: “It’s just typical of Katie’s bad luck at the moment that his hand is out of action while she’s recovering from breaking her feet.”

What has Harvey said about Carl’s accident?

Now back at home, Carl shared a video of Katie’s son Harvey, 18, comforting him.

Katie then says: “What has he done? It is like Mummy’s feet. He has broken it.”

Carl met Katie during the first national lockdown last year – and they’ve been inseparable ever since.

They’ve holidayed to Turkey together as well as to The Maldives.

And they even have his and hers matching veneers and tattoos of one another’s faces.

Katie’s made no secret that she’s keen to have a baby with Carl – and teased a “baby bump” last week.

On Friday she shared a photo of herself cradling her stomach.

The rather telling caption read: “Happy and healthy. It’s the best feeling ever I thank @carljwoods for being part of me x.”

If true, Katie would be pregnant with her sixth child.

However, neither Katie or Carl have confirmed the pregnancy yet.