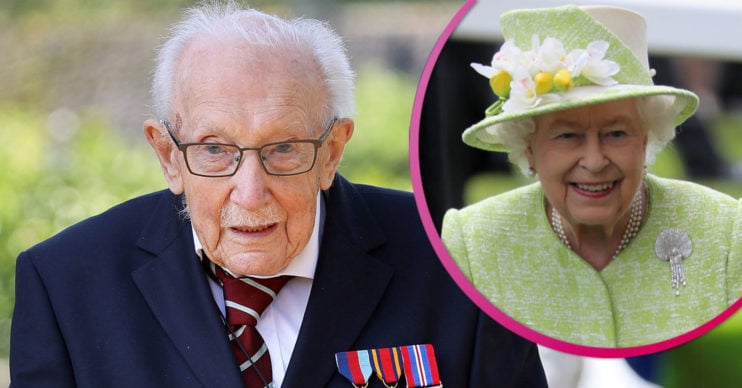 He has raised millions for the NHS

Colonel Sir Tom Moore will meet the Queen later this week to receive his knighthood.

The 100-year-old is being honoured in an investiture ceremony at Windsor Castle on Friday, July 17.

Sir Tom has raised more than £32million for the NHS amid the coronavirus pandemic.

The war veteran raised money by walking 100 lengths of his garden, ahead of his 100th birthday on April 30.

What has the palace said?

Buckingham Palace says: “During the ceremony, the Queen will use the sword that belonged to her father, George VI.

“[She] will award Captain Sir Thomas Moore with the insignia of Knight Bachelor.”

The ceremony will take place inside Windsor Castle so there will be no viewing positions for the public.

All royal investitures that have been scheduled for June and July were cancelled due to coronavirus.

However, Her Majesty is making a personal exception for Captain Tom.

The Queen will award Captain Sir Thomas Moore with the insignia of Knight Bachelor.

Meanwhile, it’s not known if there will be a perspex screen between the Queen and Tom.

Tom raised millions for the NHS

Back in May, it was announced Sir Tom would be receiving a knighthood for his fundraising efforts.

“Never for one moment could I have imagined I would be awarded with such a great honour.

“I’d like to thank Her Majesty The Queen, the Prime Minister and the Great British public. I will remain at your service…”

The statement continued: “‘This started as something small and I’ve been overwhelmed by the gratitude and love from the British public and beyond.

“We must take this opportunity to recognise our frontline heroes of the National Health Service who put their lives at risk every day to keep us safe.”

In April, Tom celebrated his 100th birthday with thousands of cards from the public and an RAF flypast above his home.

Along with his string of achievements, he also sat at the top of the charts with his cover of You’ll Never Walk Alone alongside Michael Ball.