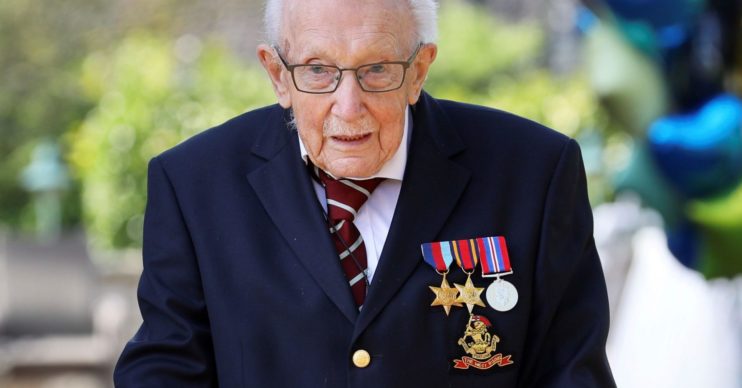 The fundraising war hero hits the milestone birthday this week

He will apparently also receive a RAF flypast to mark his 100th birthday on April 30.

Tom has incredibly raised over £28 million for NHS charities.

In addition, he currently holds the number one position for his single with Michael Ball, You’ll Never Walk Alone.

The show was one of the first to cover Tom’s achievements when he first vowed to walk 100 lengths of his garden to raise some cash.

It will dedicate the whole of Thursday’s edition of BBC Breakfast to the life and achievements of the war veteran.

Message from The Queen

“The BBC have been championing Tom since day one and now they want to go all out to celebrate his special day,” a TV insider told The Sun.

“The team on Breakfast have been working with the palace on organising the telegram in time for the morning broadcast.

“They hope it will come with a special message from Her Majesty.”

The source said the show has “been working hard on organising a fly past” to honour Tom’s service to the country throughout his life.

They added the show is “lining up lots of surprises for him too”.

Ent Daily has contacted reps for BBC Breakfast for comment.

Meanwhile, Richard Frediani, editor of BBC Breakfast, has been working on the plans.

He said: “The UK’s most watched morning show will make sure the nation can safely come together to celebrate Captain Tom’s 100th birthday.”

Tom was interviewed on BBC Radio 2 today where he revealed plans for his milestone birthday.

💕 These are just some of the amazing people that @captaintommoore has inspired to take on their own #walkwithtom challenges ⤵️
More here: https://t.co/Hi9sb4bsaw pic.twitter.com/rdx3vUBVx2

He said: “I am hoping we shall have a little family party, we can’t have a big one.

“We can’t all stand close together so maybe we will have a good party afterwards when we can all come.

Meanwhile, thousands of Brits have nominated Tom to be added to the honours list.