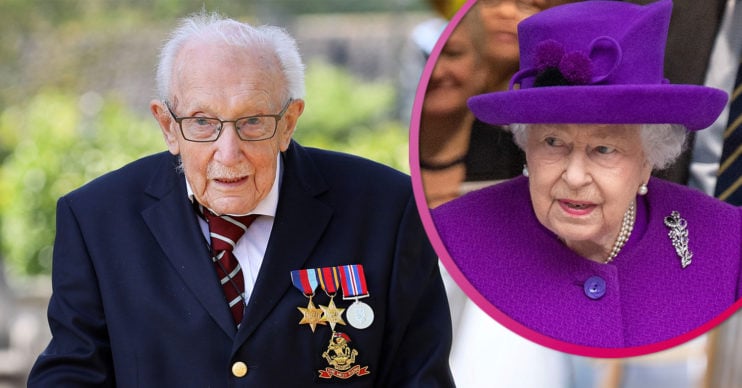 Her Majesty sent him a birthday message

Captain Tom Moore has revealed the card he’s received from the Queen on his 100th birthday.

The war veteran has been made an honorary colonel by Her Majesty on his 100th birthday after raising £30 million for the NHS.

On Thursday (April 30), Tom shared a photo of himself to Twitter as he held up the card from the Queen.

Just received a rather special birthday card from Her Majesty The Queen @RoyalFamily pic.twitter.com/jqIxpVFBRH

The card featured a photo of Her Majesty, 94, on the front.

Tom’s Twitter post was captioned: “Just received a rather special birthday card from Her Majesty The Queen.”

Just received a rather special birthday card from Her Majesty.

They wrote: “@LLieutenantBeds, The Queen’s personal representative in Bedfordshire, delivered a birthday card to @captaintommoore from Her Majesty.

“Today we join people across the UK and around the world in wishing Captain Tom Moore a very happy 100th birthday.”

Colonel Tom has received thousands of birthday cards from people up and down the country.

Many have branded him an “inspiration” and a “hero”.

Tom has raised more than £30 million to help those working on the frontline against coronavirus.

To mark his birthday, there was also an RAF flypast above his home.

Speaking about his new honorary title of Colonel, Tom told the BBC: “I’m very moved by that. I would never ever have anticipated it.”

Here's the amazing moment a Spitfire and Hurricane flew over newly-promoted #ColonelTom's house, in recognition of him raising £30 million for charity. 🙌#CaptainTom100 #CaptainTom #HappyBirthdayCaptainTompic.twitter.com/1BtQAwjTop

Read more: Tom Moore completes his challenge with a Guard of Honour

🎖⁰The Captain becomes a Colonel 🎖⁰
The Queen recognises @captaintommoore's remarkable fundraising achievement with an honour. Join #CaptainTomMoore and his family on #BBCBreakfast to celebrate from 0800 on @BBCOne 🎂🎁 pic.twitter.com/zr5dhRsaJh

Leave your birthday messages for Colonel Tom on our Facebook page @EntertainmentDailyFix!