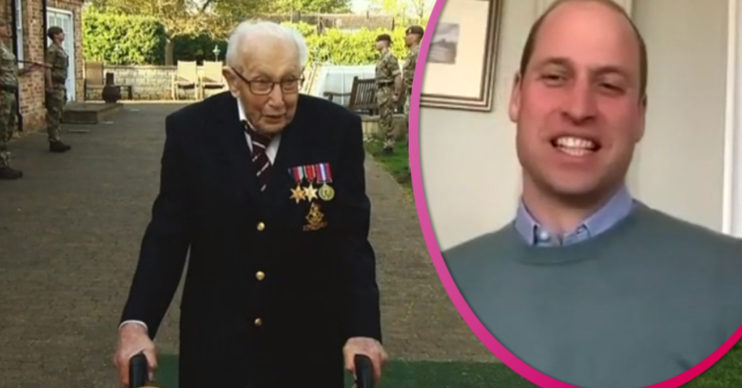 Captain Tom Moore has been left stunned after Prince William made a secret donation to his NHS fundraiser.

The 99-year-old Second World War veteran has raised an incredible £18 million for the NHS by doing laps of his garden during the coronavirus pandemic.

The Duke and Duchess of Cambridge sent a message to Captain Tom to congratulate him on his achievement.

What has William said?

In an interview with the BBC, William said: “It’s amazing.

“He knows everything and it’s wonderful that everyone has been inspired by his story and his determination.

“I think he’s a one man fundraising machine and God knows what the final total will be but good on him. I hope he keeps going.”

Captain Tom Moore responded to William and Kate’s message and branded the Duke his “super prince”.

After watching the interview, he said: “Well that I think is absolutely amazing.

“That my super prince can say something like that.”

His Twitter page also said: “A moment we will never forget!”

He completed the last of the 25-metre laps on Thursday (April 16) but has vowed to continue raising money as long as people keep donating.

Since his fundraiser has become so huge, Brits have launched a petition calling for him to be knighted on Change.org.

The campaign has received over half a million signatures.

Captain Moore has been praised by Downing Street.

A statement said Prime Minister Boris Johnson will “certainly be looking at ways to recognise Tom for his heroic efforts”.