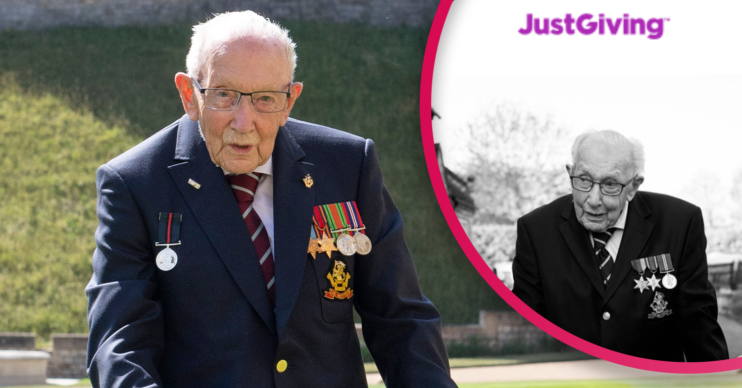 Captain Sir Tom Moore: People ‘all over the world’ vow to ‘continue the legacy’ as donations pour in

He raised more than £32 million for the NHS

The death of Captain Sir Tom Moore not only captured the hearts of the British public, but people “all over the world” have been paying tribute to the fundraising hero.

Not only that, they have been sending their heartfelt condolences while also donating to the Captain Tom Foundation.

It launched back in September 2020 after Captain Tom raised in excess of £32 million for the NHS.

When did Captain Sir Tom Moore pass away?

The nation was left devastated when news of Captain Tom’s passing was announced on Tuesday (February 2),

He was 100 years old and died after contracting COVID-19.

In an extract from his book, Tomorrow Will Be A New Day, it appears Captain Tom was philosophical about dying.

He wrote: “It comes to us all. I have often thought that when I die, I shall once more see all the people I’ve loved who have gone ahead.

“So, even if tomorrow is my last day, if all those I loved are waiting for me, then that tomorrow will be a good day, too.”

How have people been paying tribute?

Captain Tom’s family said they were aware that people might wish to send condolences.

However, they added: “But they are simply unable to manage cards, gifts or flowers sent to the house or village. Thank you.

“Instead they ask that you consider making a donation in memory of Captain Tom to The Captain Tom Foundation or to a charity of your choice.”

And that’s just what people have been doing.

People from all over the world, in fact.

‘In memory of such an inspiring gentleman’

One said: “In memory of such an inspiring gentleman, what you did was amazing.”

Another added: “Additional donation in memory of Captain Sir Tom, a wonderful example of gifting in whatever way which was possible for him. He gave his outstanding effort to complete such a physical challenge.”

Keep up the good work and continue the legacy of this wonderful man.

A third said: “Keep up the good work and continue the legacy of this wonderful man.”

Another added: “In memory of Sir Tom who inspired the nation when we needed it most. His family is in our thoughts and prayers.”

“Thank you Captain Tom for everything. May you Rest In Peace,” said another alongside their donation.

If you would like to pay tribute to Captain Sir Tom Moore, you can visit the JustGiving page to make a donation here.

ED! has contacted the Captain Tom Moore Foundation for a comment on this story.