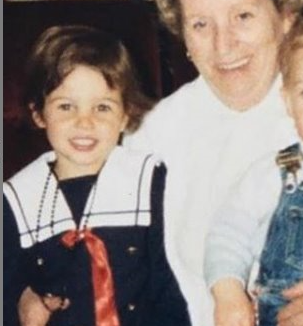 A certain celebrity has shared this adorable throwback from when they were a toddler.

The star in question looks sweet with a cheeky grin and chubby cheeks in the old pic.

This now-famous face was looking through the old family album when she came across this blast from the past.

She is pictured to the left of the shot, alongside her grandmas and brother.

This little one grew up to enter beauty contests and was once crowned Miss England in 2004 and Miss Great Britain in 2006.

She was later caught up in the very controversial series of Celebrity Big Brother in 2007.

The reality star also became a rather well known WAG, before divorcing her footballer husband in 2014.

In the same year she made a rather big Splash!

Danielle’s fans loved the old snap she shared. The star, who married Michael O’Neill last month, tagged in her brother, Matt, and captioned the photo with: “Memories will last forever miss you nanny ❤️ #brotherandsister.”

Some of the 33-year-old’s followers pointed out how much her four boys look like her.

Danielle has Archie, eight, Harry, seven, and five-year-old George with ex Jamie O’Hara, and Ronnie, one, with Michael.

“Wow Harry is your double,” commented one of her followers.