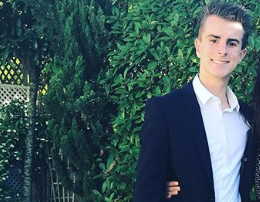 Can you guess which Loose Women star is this lad’s mum?

She's certainly very proud of him!

Loose Women’s Andrea McLean was every inch the proud mum as she sent her eldest child off to prom.

The 48-year-old shared a sweet photo to Instagram showing her posing with Finlay in the garden before he went off to his school party.

Andrea’s caption read: “Just waved my baby boy off to his prom… how has the time gone so fast?”

Just waved my baby boy off to his prom… how has the time gone so fast? #babyboy #allgrownup #mumstuff

She added hashtags including “baby boy” and “all grown up”.

Fans were quick to agree with Andrea, asking just where the time has gone! Others said they felt the same about their own growing kids.

One wrote: “Such a handsome young man takes after his lovely mummy! Just did same last week, where has the time gone?”

Even fellow TV presenter Gaby Roslin chipped in to agree: “It goes so so quickly.”

Andrea and Nick married in London just before Christmas, after being introduced by friends on a blind date in 2013.

Nick had popped the question in August while the couple were enjoying a romantic break in Paris.

Meanwhile, Andrea has just written a candid book called ‘Confessions of a Menopausal Woman: Everything you want to know but are too afraid to ask’, about her experience with going through menopause.

She had a glamorous star-studded launch party last week attended by her Loose Women co-stars including Christine Lampard.

Are you emotional at how fast your little ones are growing up? Leave us a comment on our Facebook page @EntertainmentDailyFix and let us know what you think!