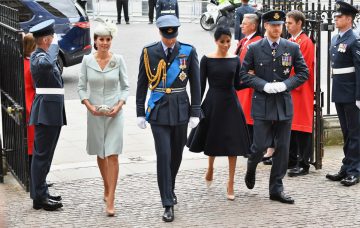 Kate, William, Meghan and Harry join The Queen to mark 100 years of RAF

The two couples were among the guests who attended a special service at Westminster Abbey on Tuesday morning to mark the centenary of the Royal Air Force.

Meghan, 36, meanwhile, opted for a boat neck black dress that was a similar style to her wedding dress, just a shorter length, and a black fascinator and nude heels.

It was the second day in a row royal watchers got to glimpse both couples, as just yesterday they were all at Prince Louis’ christening.

Read more: Duke and Duchess of Cambridge pictured with son Louis at his christening

Today’s service at Westminster Abbey kicks off an entire day of celebrations surrounding the RAF milestone.

There will also be an enormous parade on The Mall and a fly-past over Buckingham Palace, with up to 100 aircraft taking part.

The Queen will also give a speech.

The entire service at Westminster Abbey is being aired live on BBC One.

Other senior royals in attendance included The Princess Royal, The Duke of York and The Earl and Countess of Wessex.

It’s the second time this week we’ve seen the Cambridge and Sussex couples in public.

William and Kate’s youngest son, who is fifth in line to the throne, was christened at The Chapel Royal, St James’ Palace on Monday afternoon.

It marked the first time royal fans have seen all five Cambridges together, as Louis’ older siblings George, four, and Charlotte, three, were also in attendance.

The family were joined by newlyweds The Duke and Duchess of Sussex, The Prince of Wales and Duchess of Cornwall, and Kate’s family, as well as Louis’ six godparents.

Buckingham Palace said yesterday the decision had been made some time ago and was nothing to do with health issues.

Sources have instead suggested it was because The Queen was travelling to London from Norfolk on Monday and has a busy week of engagements ahead of her, starting with today’s RAF celebration.

Do you enjoy seeing pictures of the royal family? Leave us a comment on our Facebook page @EntertainmentDailyFix and let us know what you think!